Cito Gaston, who played 11 seasons in the National League and was named to the 1970 All-Star team, was the first African-American manager to lead his team to a World Series victory when he managed the Toronto Blue Jays in 1992, defeating the Atlanta Braves. He repeated the feat with the Jays in 1993, when the Blue Jays prevailed over the Philadelphia Phillies, becoming the first manager since Sparky Anderson to win back to back World Series titles - Sparky did it with the Cincinnati Reds in 1975 and 1976. Gaston was also the Blue Jays hitting coach from 1982 through 1989 and again from 2000 to 2001.

When Gaston first took over for Jimy Williams as manager of the Blue Jays in 1989, the club had been badly underperforming, mired in last place with a 12-24 record. He turned things around, leading the team to a tremendous comeback in which they passed the surprising division-leading Baltimore Orioles on the season's last weekend to clinch the AL East title. They lost to the Oakland Athletics in the ALCS when Rickey Henderson put on a performance for the ages. The Blue Jays won another division title in 1991; Gaston missed a month of play at the end of the season, when he had to have back surgery; hitting coach Gene Tenace replaced him and kept the team on track. However, they were defeated by the Minnesota Twins in the ALCS. He followed that appearance by guiding the Jays to back-to-back AL pennants and World Series wins in 1992 and 1993.

The Jays were not able to maintain themselves at the top, and were pushed aside by the renaissance of the New York Yankees and Boston Red Sox, who would dominate the AL East for the rest of the decade (with some good years by the Baltimore Orioles thrown in as well). Gaston was criticized for the team's lack of success, as the Blue Jays settled into a rut of 4th and 5th place finishes while failing to develop a new generation of young star players. Gaston was called a "push-button", "do-nothing" manager who could not relate with the younger players. He was fired at the tail end of the 1997 season, with pitching coach Mel Queen finishing out the year. 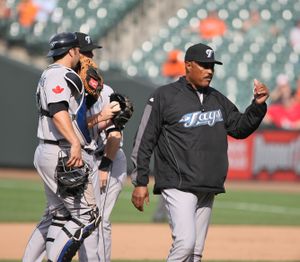 Gaston as coach of the Jays in the late 2000s

Gaston failed to find another managerial job after his first stint at the helm of the Blue Jays, something many observers found surprising giving his history of post-season success, while many managers with mediocre winning records were retreaded from team to team. He had to wait for his old team to fall into a serious crisis to receive another chance; on June 20, 2008 he was again named manager of the Toronto Blue Jays, replacing John Gibbons, who was fired after the team had compiled a 4-13 record over their past 17 games and dropped to last place in the AL East. He brought in three veteran coaches to assist him, Dwayne Murphy, Nick Leyva and Gene Tenace, to replace Gary Denbo, Marty Pevey and Ernie Whitt, who had been fired alongside Gibbons; Leyva and Tenace had served as coaches for him in his first incarnation as Blue Jay manager.

Gaston surprised most observers by turning the Blue Jays around after taking over in 2008, having the team finish with a winning record and threatening to take over third place from the New York Yankees thanks to a late-season surge. He returned in 2009 and again worked some magic. With the Blue Jays decimated by injuries to their top pitchers (Jesse Litsch, B.J. Ryan, Dustin McGowan, Casey Janssen), he worked a number of youngsters into the starting rotation and coaxed excellent starts from Aaron Hill and Adam Lind into a great April record. The team stayed on top of the AL East until more injuries and a cooling off of the hitters brought the team back to earth. He moved upstairs as a consultant for the Blue Jays in 2011-2013. 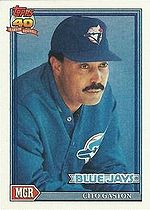