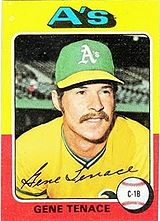 "If you divide his WAR by his plate appearances, he was more valuable on a per plate appearances basis than Bill Dickey, Roy Campanella, Gary Carter and Yogi Berra. - from an article at CalltothePen.com [1] about Gene Tenace

"Champ here. I’m all about havin’ fun. You know, start a fire in someone’s kitchen, maybe go to SeaWorld, take my pants off… Anyway, I’ve become kind of famous for my signature catch-phrase… WHAMMY! Like, Gene Tenace at the plate… and WHAMMY!" - Champ Kind (David Koechner) in the 2004 film Anchorman: The Legend Of Ron Burgundy

Gene Tenace was one of the top catchers of his era, though perhaps a bit under appreciated in his time despite being a postseason star for one of the most accomplished teams in baseball history, the early 1970s Oakland A's. A solid defensive backstop, as a hitter his career adjusted OPS was an outstanding 135, which is tied for 98th all-time and the second highest for any player who played most of his games at catcher, behind only Mike Piazza's 142. He caught nearly 900 games, but also played first base over 600 times. He was well-known for his tendency to draw a lot of walks (over 100 six times). Despite a low career batting average, he compiled an amazing OBP of nearly 39 percent.

He came up with the Athletics in the Reggie Jackson and Sal Bando "Mustache Gang" days, staying with them from 1969 to 1976. During that time, the A's never finished worse than 2nd in the division, won the AL West five straight years from 1971 to 1975, and won the World Series three straight times from 1972 to 1974. Despite that, they sometimes had trouble filling the stands for a World Series game thanks, in large part, to the bizarre ways and means of team owner Charlie Finley.

Tenace was the World Series MVP in 1972 when he hit four home runs, including two in Game 1 in his first two World Series at-bats (which was a first at the time, later equaled by Andruw Jones in the 1996 World Series). Tenace hit .348 during the Series, drove in 9 runs and set a then-World Series record for a 7-game series with a .913 slugging percentage while leading the A's to victory over the Cincinnati Reds. This was a complete surprise, as he had not been a regular player for most of the 1972 regular season. Though Tenace had driven in the game-deciding run in Game 5 of the 1972 ALCS against the Detroit Tigers, his Game 1 performance in the 1972 Series was a real "star is born" moment: he was a relative unknown before the game started, and a star by the end of the Series.

From 1973 to 1975 he hit between 24 and 29 home runs each year while drawing over 100 walks each season as well. In Oakland's 1973 World Series victory over the New York Mets, Tenace tied Babe Ruth's then-Series record of 11 bases on balls, set during the 1926 World Series and later broken by Barry Bonds' total of 13 free passes in the 2002 World Series.

He joined the San Diego Padres as a free agent in 1977, alongside teammate Rollie Fingers, and stayed with the team for four years, hitting for moderate power and drawing as many as 125 walks in a season. These were the days when Dave Winfield and Ozzie Smith also played for the Padres, but they did not contend for the pennant. They did have the first winning season in franchise history in 1978, but it was a one-year blip. Gene finished his career playing two seasons as a backup catcher with the St. Louis Cardinals and one with the Pittsburgh Pirates. The Cardinals in 1982 were World Series champs, and the first-string catcher Darrell Porter was the Series MVP.

Lifetime, Tenace hit 201 home runs and drew 984 walks. He hit only .241, but drew so many walks that his on-base percentage was a lofty .388. He led the league twice in walks and once in hit-by-pitch. He was third in the league in on-base percentage three times, he was regularly in the top 3 in hit-by-pitch, and third in home runs once. Not surprisingly, the most similar player to Gene Tenace is Mickey Tettleton, who was also a catcher who hit for a low average with good power and lots of walks, but who played in a friendlier offensive context.

He played for four World Series champion teams, hitting 4 home runs and getting 17 walks in Series play. All 4 of the home runs were in the 1972 Series, which tied the record for a Series at the time, later broken by Reggie Jackson's 5 in the 1977 World Series. He appeared in one All-Star Game, in 1975.

After his playing days ended, Tenace coached in the Milwaukee Brewers organization and then was a Houston Astros coach in 1986 and 1987. After a year managing the Prince William Yankees, he joined the Toronto Blue Jays organization, making the major league coaching staff in 1990, and briefly filling in as manager of the club the next year when Cito Gaston was hospitalized. He remained with the Jays as a coach through 1997. He then joined the Boston Red Sox organization, serving as hitting coach for the Pawtucket Red Sox in 1999, and Trenton in 2001. In 2002, Tenace became a hitting instructor in the Cardinals organization. On June 20, 2008, his old friend Gaston brought him back to the majors as hitting coach of the Blue Jays, when he began his second stint as manager of the Jays. He announced his retirement after the 2009 season.

Tenace and Sal Bando made cameos as themselves in a season 17 episode of The Simpsons, "Regarding Margie", airing in 2006.