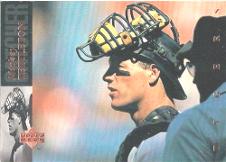 Mickey Tettleton was signed as a 5th round pick in the 1981 amateur draft by the Oakland A's and scouting director Dick Wiencek. He played fourteen years in the big leagues, primarily at catcher. He was known for having good power and drawing many walks. A two-time All-Star, he received three Silver Slugger awards. His entire major league career was spent in the American League.

The most similar player to Tettleton, according to the similarity scores method, is Gene Tenace. Both were catchers who sometimes played other positions, both had low averages but good power and drew many walks, and both had long careers.

Tettleton was probably best known for his unorthodox batting stance. As he awaited the pitch, he would stand with his wrists hanging limply at his waist, the bat pointing straight backwards from his hips, before righting himself as the pitch approached.