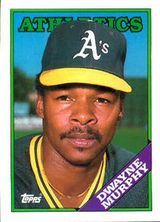 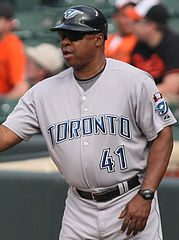 Outfielder Dwayne Murphy played a dozen years in the big leagues, mostly for the Oakland Athletics, and combined top defense with some power, speed, and an ability to draw walks.

Murphy was born in Merced, California, about 120 miles from Oakland, and attended Antelope Valley High School, playing both baseball and football. He was selected by the A's in the 15th round of the 1973 amateur draft and turned down a football scholarship to Arizona State University to sign with them for a $6,500 bonus. He made his pro debut with the Lewiston Broncs in 1973 and reached the majors in 1978 at age 23. He became Oakland's regular centerfielder in 1979, hitting .255 with 11 home runs and 15 stolen bases. Playing alongside Rickey Henderson and Tony Armas, he was a part of what many fans saw as the best young outfield in baseball.

Murphy won a Gold Glove in 1980, the first of six straight years earning that honor, and led the American League with 22 sacrifice hits, while stealing 26 bases. In the 1981 ALDS against the Kansas City Royals, he hit .545 while adding a homer in the first game of the series. Though his batting average dipped to .238 in 1982, his home run production increased to 27 round trippers to go along with 26 steals, leading the AL in Power/Speed Number. He had perhaps his finest year at the plate in 1984, hitting .256 with 33 home runs.

Slowed by injuries in 1986 and 1987, Murphy became a free agent following the 1987 campaign. He began 1988 with the unaffiliated Fresno Suns of the California League before being signed by the Detroit Tigers in June. After spending 1989 with the Philadelphia Phillies, he played for the Yakult Swallows in Japan in 1990, his final pro season.

Following his baseball career, Murphy returned to football as a high school coach for four years. He then managed the AZL Diamondbacks in 1996 and coached the High Desert Mavericks in 1997. Murphy was a coach with the Arizona Diamondbacks from their inception in 1998 until 2003, including for their World Series-winning season in 2001. After serving as a coach for the AAA Syracuse SkyChiefs in 2005 and 2006, he became a roving minor league hitting instructor for the Toronto Blue Jays in 2007. He held that position when he was named the team's first base coach on June 20, 2008, when Cito Gaston took over as the club's manager. He became hitting coach in 2010 and moved back to first base in 2013. He retired following the 2013 season.