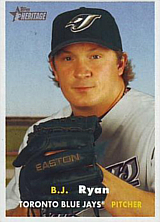 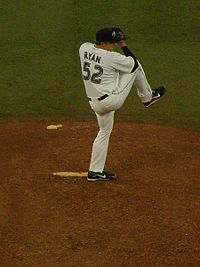 B.J. Ryan was signed by Cincinnati Reds scout Johnny Almaraz after college. He started the 1999 season with the Chattanooga Lookouts (AA) in the Reds organization, made his major league debut with the Reds, and finished the season in the Baltimore Orioles bullpen.

The 2000 season began and ended with B.J. in the Orioles bullpen, with a seven-week stint in AAA with the Rochester Red Wings in between. During his 42 appearances with the Orioles, he was 4th among American League rookie pitchers. He was selected to participate in the 2000 Futures Game at Fenway Park, but did not pitch. He appeared in 61 games in 2001, marking his first full season in the majors. He only allowed opposing first batters to hit .151 (8 for 53), giving him the 7th-best mark for AL relievers that season. In 2002, he made 67 appearances, tying Jorge Julio for second place on the club.

On May 1, 2003, Ryan won a game without throwing a pitch. He entered the game and picked off a runner to end an inning. The only other time this is known to have happened in a major league game was to Jim Bluejacket in 1914. B.J. also had a successful 2004. For the second time, he tied the Orioles' club record for appearances with 76. He finished the year 4th in the AL among all relievers and he was 1st among lefties in games pitched. He went 1-4 with Baltimore in 2005, with a 2.43 ERA over 69 games.

He was signed by the Toronto Blue Jays in 2006, going 2-2 with an ERA of 1.37 over 65 games, ranking him second among AL relievers (ERA-wise). He converted 11 saves in 11 straight opportunities with his new club. He pitched a scoreless frame in the All-Star Game and compiled a career best 38 saves, good for third best in the American League. A rough start to 2007 (12.46 ERA in 4 1/3rd innings) was compounded with a trip under the knife for Tommy John surgery. He was back on the bump at the start of the 2008 season, finishing with a 2.95 ERA and 32 saves in 60 appearances for the Jays.

A strained trapezius and diminished velocity led to the end of the line as a big leaguer for B.J. With a 6.53 ERA in July, he was released by Toronto, owed approximately $15 million on the deal he signed before the 2006 season. The Chicago Cubs took a look at him for a month, but with his velocity having deserted him, he asked for an unconditional release and did not returned to organized baseball.

In July 2019, B.J. was announced as the new pitching coach for the Louisiana Ragin' Cajuns.

Ryan is married with two children (as of 2009). His entrance music as a closer was the 2004 single "Duality" by Slipknot.