The 2010 World Series ran from October 27 to November 1, 2010. They featured the San Francisco Giants and Texas Rangers, with the National League holding home field advantage after winning the 2010 All-Star Game. The Giants won the Series, their first championship in 56 years, their last having come when they were still the New York Giants.

The Giants faced off against former Cy Young Award winner Cliff Lee, who came in with a 7-0, 1.26 record in his postseason career, while their club had hit .231 in the NLDS and NLCS. No matter, as they banged up Lee for eight hits and seven runs, knocking him out in the 5th inning. 2B Freddy Sanchez went 4 for 5 with 2 runs, 3 RBI and 3 doubles, becoming the first player ever to double in his first three World Series at-bats. Texas scored twice in the first two innings off Giants ace Tim Lincecum, with Lee doubling as part of the second rally, but the Giants had the lead for good by the 5th.

Texas set a record for most runs allowed in a franchise's first two World Series games, as their 20 were five more than the Colorado Rockies gave up in 2007. They got a good start, though, as C.J. Wilson matched Matt Cain with shutout ball for the first four innings. In the 5th, San Francisco got on the board when veteran SS Edgar Renteria took Wilson deep. It was just 1-0 when Wilson left in the top of the 7th due to a blister on his pitching hand. Five relievers then allowed the Giants to score an inherited runner and then plate seven more runs in the 8th to turn a pitching duel into a rout. Meanwhile, Cain remained dominant, blanking Texas for 7 2/3 innings on four hits before getting yanked. Javier Lopez and 37-year-old Guillermo Mota closed out the win. Renteria finished with 3 RBI and two runs and PH Aaron Rowand cracked a two-run triple then scored.

After Nolan Ryan threw out the first pitch, Colby Lewis showed off his arm, giving up no runs in the first six innings in picking up the victory as he improved to 3-0 in the postseason. Texas scored quickly, when rookie 1B Mitch Moreland, the #9 hitter, cracked a three-run homer off Jonathan Sanchez in the 2nd; Moreland had never homered off a left-hander before in the majors. CF Josh Hamilton crushed one 426 feet in the 4th for a 4-0 cushion. RF Cody Ross took Lewis deep in the 7th, as did CF Andres Torres in the 8th, but it was too little, too late. Neftali Feliz became the second-youngest pitcher to save a World Series game, following Bob Welch in 1978. He surpassed team owner Ryan for that honor. For the first time in seven World Series games, a team from Texas got a win. 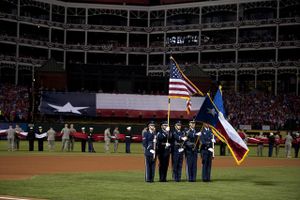 The U.S. Air Force Honor Guard presents the colors during the playing of the national anthem at Game 4 of World Series on Oct. 31, 2010

Two former Presidents, George W. Bush (former Rangers owner) and George H.W. Bush, threw out the first pitch, the first time two former presidents had come to a World Series game. For the second time in four games, Texas's vaunted offense was held scoreless by the Giants staff. It was the first time since the Baltimore Orioles in 1966 that a team threw two shutouts in the same Series. 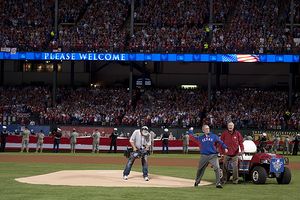 San Francisco went to a rookie battery of Madison Bumgarner and Buster Posey, the first all-rookie battery to start a Series game since Yogi Berra and Spec Shea in 1947. Bumgarner allowed only three hits and two walks in eight shutout innings before Brian Wilson closed it in the 9th, while Posey contributed a solo home run in the 8th. CF Andres Torres (2 doubles, single), DH Aubrey Huff (two-run homer), SS Edgar Renteria (3 hits) and LF Cody Ross (a shoestring grab) all came up big as well.

Texas was not helped by two calls at first base that went against them; in both cases, Rangers skipper Ron Washington argued the call with umpire Jeff Kellogg to no avail. Replays seemed to indicate Kellogg was wrong in each instance.

The final game of the Series featured an excellent pitching duel of the team's aces, with Tim Lincecum and Cliff Lee each shutting out their opponents for six innings. In the 7th, though, Lee was the first to crack. The inning began with singles by LF Cody Ross and 3B Juan Uribe. 1B Aubrey Huff, the Giants' top home run hitter during the season, pulled off the first sacrifice hit of his career. Lee recovered to fan DH Pat Burrell. One out away from ending the rally, Lee served up a three-run homer to SS Edgar Renteria. It marked Renteria's second World Series-winning hit; he also had the winning hit in the 1997 World Series. Lincecum gave up a solo homer in the bottom of the 7th to RF Nelson Cruz but that was it - he finished with 3 hits, 2 walks, 1 run and 10 strikeouts in 8 innings for his second win of the Series. Brian Wilson fanned 2 of 3 batters in the 9th for his first save.