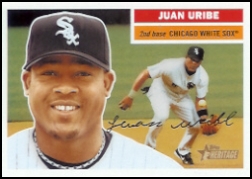 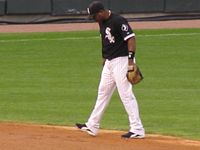 Shortstop Juan Uribe was signed by the Colorado Rockies in 1997 and made his big league debut with the club in 2001. He became the team's regular shortstop in the second half of the season, hitting .300 with 8 homers in 72 games. He also was second in the National League with 11 triples, despite being in the majors for only half the year. In 2002, he remained a Rockies regular but had a disappointing sophomore season. He began the year by hitting .373 in April, but he only batted .211 the rest of the way. Uribe was injured to begin the 2003 season, and he missed the first 58 games of the Rockies season. He still managed to club 10 home runs. After the season, he was traded to the Chicago White Sox for Aaron Miles.

Uribe began his first season with the Sox in 2004 as a utility player, but by the end of the year, he was the club's regular second baseman. He hit .283 with a career-high 23 homers and 74 RBIs. When the Sox acquired Tadahito Iguchi before the 2005 season, Uribe was moved back to shortstop. He hit 16 homers for the Sox that year and provided solid defense in the infield. In the postseason, he reached base safely in 11 of 12 games and recorded the final two outs for the Sox in the final game of their World Series triumph over the Houston Astros.

Uribe had a career day for the Los Angeles Dodgers on July 5, 2013: he hit a double, triple and homer and drove in 7 runs to lead the Dodgers to a 10-2 defeat of the San Francisco Giants. On August 10th, he suffered a bit of a public embarrassment when he fell victim to the hidden ball trick in the 4th inning of a game against the Tampa Bay Rays. He had just advanced from second to third base on a sacrifice fly by A.J. Ellis and was dusting himself off when he failed to notice that the Rays had quietly relayed the ball to 3B Evan Longoria; when he momentarily lifted his foot off the bag, Longoria tagged him out. While his teammates riled him for not paying proper attention, the Dodgers won that game, 5-0, and were on a huge hot streak at the time, so the damage was minimal. Teammate Jerry Hairston Jr. then had a good laugh at Uribe's expense, hiring magician Jesse Latimer, who calls himself "the world champion of magic" to show Uribe how a baseball can be made to appear and disappear at will, the whole lesson ending up on video. He hit .278 in 132 games that season with 12 homers and 50 RBIs. He followed that with another productive season in 2014, when he hit .311 in 103 games, with 9 homers and 54 RBIs. The Dodgers won a division title both years, but failed to reach the World Series. In the 2013 NLDS, Uribe went 6 for 16 (.375) with 2 homers against the Atlanta Braves, but he was limited to a .130 average in the 2013 NLCS against the St. Louis Cardinals and to .118 in the 2014 NLDS, when the Cardinals again eliminated the Dodgers.

In the hope of finally returning to the World Series, the Dodgers decided to go with a veteran infield in 2015, by acquiring 2B Kyle Kendrick and SS Jimmy Rollins to replace Dee Gordon and Hanley Ramirez, respectively. Uribe completed the left side by returning to play third base. However, the emergence of Alex Guerrero as one of the top-hitting rookies in the majors, in addition to the continued solid production from Justin Turner, who had filled in ably when Uribe was unavailable the previous two seasons, meant that the veteran Had become expendable. In late May, rumors emerged that he was about to be traded to the Atlanta Braves, with the Dodgers acquiring the more versatile Alberto Callaspo in return. Callaspo originally objected to the trade, after signing as a free agent with Atlanta in the off-season, but he changed his mind on May 27th, allowing the deal to go ahead. P Chris Withrow also headed to Atlanta, with Ps Eric Stults, Ian Thomas and Juan Jaime coming the other way. The Dodgers had scheduled to honor Uribe with a bobblehead doll give-away on July 11th and announced they would still go ahead with the promotion in spite of Uribe's departure. He hit .247 in 29 games with Los Angeles, with 1 homer and 6 RBIs. He did not stay long with the Braves, hitting .285 with 7 homers and 17 RBIs in 46 games, before he was traded again on July 24th. This time, he was sent to the New York Mets alongside fellow infielder Kelly Johnson, no stranger to trades himself, in return for minor leaguers John Gant and Rob Whalen. The Mets also placed 3B David Wright on the 60-day disabled list that day, explaining the need for Juan's help. He quickly got to play the hero for the Mets, as on July 26th, he drove a pitch from former Dodgers teammate Kenley Jansen to the top of the center field wall at Citi Field in the 10th inning to drive in Curtis Granderson from second base and give the Mets a walk-off, 3-2 win. However, he hit only .219 in 44 games for the Mets and did not play much after Wright returned to the line-up in September. Overall, he hit.253 with 14 homers and 43 RBIs between the three stops. He only got one at-bat in the postseason, and it came in Game 3 of the World Series on October 30th. In the bottom of the 6th, he pinch-hit for Noah Syndergaard and hit a single off Franklin Morales of the Kansas City Royals and singled to right to drive in Juan Lagares from second base, then came to score on a single by Wright as the Mets scored 4 runs on their way to a 9-3 win.

He became a free agent after the 2015 season and on February 29, 2016 signed a one-year, $4 million deal with the Cleveland Indians. It turned out to be his final season in the majors as he was released on August 5th, thus missing Cleveland's run to the World Series. In 73 games, he hat hit .206 with 7 homers and 25 RBIs.

He is the nephew of José Uribe.