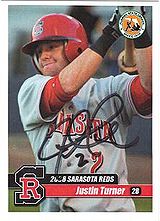 Infielder Justin Turner was drafted by the Cincinnati Reds in the 7th round of the 2006 amateur draft. He was signed by scout Mike Misuraca and made his pro debut that summer.

Turner was one of three players, along with Ryan Freel and Brandon Waring, sent to the Baltimore Orioles by the Reds in return for catcher Ramon Hernandez on December 9, 2008. He made his major league debut with Baltimore towards the end of the 2009 season, going 3 for 18 over 12 games.

Turner made the New York Mets' opening day roster in 2011 and injuries soon gave him a chance to play regularly at second base and third base. He made the most of this opportunity in May, putting up a batting line of .325/.378/.458 with 9 doubles and 20 RBI to earn the National League's Rookie of the Month honors. He was the first member of the Mets to win the award since its creation in 2001. During the month, he recorded at least one RBI in 13 of 15 consecutive games while hitting his first career home run at Houston on May 15th. He played 117 games for the Mets that year, hitting .260 with 30 doubles and 4 homers, scoring 49 runs and driving in 51; he played 78 games at second base and 38 at third base. In 2012, his playing time diminished as he became a true utility infielder, playing between 10 and 15 games at all four infield positions, in addition to pinch-hitting duties. He went to bat 171 times in 94 games, hitting .269 with 13 doubles. He was again a back-up player in 2013, this time getting into 86 games almost equally spread out among the four infield positions. He continued to hit fairly well, checking in at .280 in 200 at-bats. In spite of his relatively good batting averages over his three seasons as full-time major leaguer, his OPS+ peaked at 100, the third year, because of his lack of home run power and small number of walks. Still, his ability to play multiple positions made him a valuable asset on the bench.

Justin became a free agent after the 2013 season and signed a minor league contract with the Los Angeles Dodgers for 2014, coupled with a invitation to spring training. He surprised observers by emerging from a contest to succeed Mark Ellis at second base job with the starting nod for the Dodgers' opener against the Arizona Diamondbacks in Sydney, Australia on March 22nd. With the D-Backs starting lefty Wade Miley, he beat out other candidates such as Justin Sellers, Dee Gordon, Chone Figgins, Brendan Harris and Cuban signee Alex Guerrero as manager Don Mattingly opted to go for a platoon to start the season. He played 109 games, seeing significant time at third, second and shortstop, and hit a smashing .340 with 21 doubles, 7 homers and 43 RBIs. His OPS+ was 155, miles above anything he had posted before. In spite of this, he barely saw any action in his first postseason action, as he went 0 for 2 when the Dodgers were defeated by the St. Louis Cardinals in the Division Series.

Turner's breakout season turned out not to be a flash in the pan, as he was once again very productive in 2015. This time, he did find a permanent position, evincing Jose Uribe from the third base job, and played 126 games. He hit .294 with a career-high 16 homers, 55 runs and 60 RBIs. he also tied his career best with 113 hits, and his 26 doubles were just below his best. His OPS+ was once again solid, at 139. This time he did see significant action in the postseason, starting all five games of the NLDS against the Mets. He was the Dodgers' best hitter, going 10 for 19 (.526) with 6 doubles. He continued to be very productive in 2016, as he set a new personal best for homers on July 21st, when he hit his 16th and 17th in the same game off Stephen Strasburg of the Washington Nationals. he also drove in 5 runs in that game, in which the Dodgers handed Strasburg his first loss of the year, after 13 wins, 6-3. He finished the year at .275 with 34 doubles, 27 homers, 79 runs and 90 RBIs in 151 games. His OP+ of 124 was down fromhis previous figures of 155 in 2014 and 139 in 2015, but considering that he played almost every day, he remained extremely valuable to the Dodgers. He continued to hit in the postseason batting .400 with a homer and 5 RBIs as Los Angeles defeated the Nationals in the Division Series, and then adding a home run and 3 RBIs in the Dodgers' loss to the Chicago Cubs in the National League Championship Series. He became a free agent after the season but on December 23rd, he re-signed with the Dodgers for four years and $64 million.

In 2017, he became an All-Star for the first time when he won the Final Man Vote in the National League with a record 20.8 million votes. It seems that Dodgers fans were moved to vote massively after being chastized by closer Kenley Jansen following the regular ballot for failing to elect any Dodgers players to the starting line-up in spite of the team's great first-half record. He had an outstanding all-around season that year, hitting .320 with 32 doubles, 21 homers, 72 runs and 71 RBIs. He continued to hit in the postseason, as he went 6 for 13 (.462) ion the three-game sweep of the Arizona Diamondbacks in the Division Series and 6 for 18 with 2 homers and 7 RBIs in the Dodgers' win over the Chicago Cubs in the NLCS. That performance earned him MVP honors in the series. In the 2017 World Series against the Houston Astros, he slowed down a bit, being limited to 4 hits in 25 at-bats, although three of them went for extra bases - two doubles and a homer and he scored 4 runs and drove in 2. The Dodgers lost a closely-fought series in seven games.

He suffered an injury setback just before the start of the 2018 season, when he had his wrist broken when hit by a pitch by Kendall Graveman in the 1st inning of a Cactus League game against the Oakland Athletics on March 19th. The good news was that Turner would not need surgery, but he would still need to start the season on the disabled list. He returned to action on May 15th and two days later, he had a five-RBI day in a 7-0 win over the Miami Marlins that ended a six-game losing streak. He was the National League Player of the Month in August when he hit .402, scored 22 runs, hit 11 doubles and 6 homers and drove in 20 runs. His slugging percentage was .722 for the month. He finished the season at .312 with 14 homers and 52 RBIs in 103 games. He continued to hit well in the postseason, with a total of 20 hits in 67 at-bats (.299) over the three series which the Dodgers played, falling once again short of a title when they lost to the Boston Red Sox in the 2018 World Series. On May 7, 2019, he had a great game to lead the Dodgers to a 9-0 win over the Atlanta Braves. He hit three homers and drove in 6 runs, a nice burst of power as he had only one homer until then, hit the previous week. It was the first three-homer game of his career, and the 6 RBIs were also a personal best. He hit .290 in 135 games that season, and matched his personal best with 27 homers. He had 67 RBIs and his 80 runs scored set a new personal mark. However, the Dodgers failed to go deep in the postseason as they were upset by the Washington Nationals in the Division Series. He went 6 for 21 with 2 doubles and 2 homers in the five games, so at least he did his part.

Turner's 2020 season was cut short by the COVID-19 pandemic, like everyone else's and he was limited to 42 games in the 60-game regular season. His production with the bat continued to be strong, as he hit .307 with 4 homers and 23 RBIs, good for an OPS+ of 135. The Dodgers had the best record in the majors during the abbreviated regular season and he started every game of the postseason at third base. He got off to a slow start, as he was a combined 2 for 18 with no extra-base hits in the first two rounds of the postseason, but he began to contribute in the NLCS, when he was 7 for 25 with 2 doubles and 1 homer as the Dodgers defeated the Atlanta Braves in 7 games, sending them to the World Series for the third time in four years. He continued to hit, going 8 for 25 (.320) with 4 doubles, 2 homers, 5 runs scored and 2 RBIs in the 6 games against the Tampa Bay Rays. In Game 4, he became the fourth player in Dodgers history to have a four-hit game in the World Series, following Junior Gilliam and Maury Wills decades earlier, and teammate Corey Seager, whose fourth hit of the game had come only moments before. However, the series ended on a controversial note for him: in the 8th inning of Game 6, he was removed from the game when Major League Baseball advised the Dodgers that he had just tested positive for COVID-19. According to agreed health and safety protocols, he was placed in isolation, but when the Dodgers sealed their victory and the championship moments later, he expressly disobeyed orders to remain in isolation, joining his celebrating teammates on the field and posing for pictures with the World Series Trophy, all without wearing a mask or practicing any form of distancing. When security asked him to stop, he told them to get lost, in effect. His selfish and irresponsible behavior was quickly condemned around the country and put a serious taint on the Dodgers' otherwise historic championship, their first since 1988. MLB announced it would open an inquiry, and he was likely to face some form of punishment for ignoring protocols and putting numerous others at risk. However, on November 6th, MLB declined to punish him, as it found some extenuating circumstances, including miscommunications, that had led to the unfortunate situation.

On February 13, 2021, Turner announced that he had come to an agreement with the Dodgers and would be back for at least one more season.