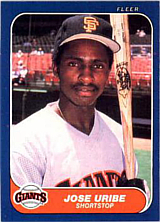 José played in the minors under the name José Gonzalez because Gonzalez was his father's last name. Hispanics frequently identify themselves by both their father's and their mother's family, hence the name Uribe, which was his mother's family name. When José broke into the majors, he decided that it would be better to be known as José Uribe, because José Gonzalez was too common a name - in fact a young outfielder for the Dodgers had the same name. He first said he wanted to be called Uribe Gonzalez (using Uribe as a first name), then settled a few weeks later on José Uribe.

His name became the punchline to a joke about baseball trades at the time: Who was the player to be named later? Jose Uribe.

Uribe was signed by the New York Yankees in 1977 but spent the year on the disabled list and was released in short order. Three years later, he was signed by the St. Louis Cardinals. Making his professional debut at 22, he hit .268 for the 1981 St. Petersburg Cardinals, starting off at high A ball. In 1982, he batted .247 for the Arkansas Travelers and .357 for the Louisville Redbirds in limited action in his Triple A debut.

José hit .284/~.341/.378 the 1983 Redbirds and stole 26 bases in 36 tries. He led the American Association with 14 sacrifice hits, though his 33 errors led league shortstops. Ozzie Smith held down short in St. Louis so Uribe had no chance in the majors. Back in Louisville in 1984, his batting line read .279/~.317/.347. He again led Double A shortstops in errors (32) but also in assists (455, 82 more than the next player), putouts (233) and double plays (96), giving him the lead in fielding percentage (.956). He made the league's All-Star team at shortstop. Uribe then went 4 for 19 in a September call-up. As the Cardinals did not need him at shortstop with the Wizard of Oz there, they dealt him, with David Green, Dave LaPoint and Gary Rajsich, to the San Francisco Giants for Jack Clark, a key performer in the Cards' 1985 success.

The next season, 1988, the 29-year-old batted .252/.301/.318 but set a career high with 47 runs scored. His most famous run though was one that was not counted. On September 23, the Giants played the Los Angeles Dodgers and Orel Hershiser, who was closing in on Don Drysdale's consecutive scoreless inning record. Uribe led off the 3rd inning with a single and pitcher Atlee Hammaker laid down a bunt single. Brett Butler hit into a force out at second, Uribe taking third. Ernest Riles grounded to Steve Sax, who threw to Alfredo Griffin for one; José crossed home and the throw to first did not get Riles in time. The scoreless inning streak would seem to be over with Uribe getting the credit - but instead umpire Paul Runge said Butler caused interference and it was a double play, ending the inning without Uribe's run counting. Hershiser said that at the time, he thought to himself "Well, the streak is gone."

Overall, José had hit .241/.300/.314 in the majors with 74 steals in 120 tries. His contact and OBP skills were typical for a shortstop of the era while his power was low even by those standards. He served about 7 years as a major league starter and spent about a decade in the majors altogether.

After his playing career ended, Uribe returned to his hometown in the Dominican Republic and owned a hardware store and other businesses. He had at least 14 children and was married twice. In 2006, he unsuccessfully ran for mayor of the town.

Later that year, he tragically died after crashing his SUV; he was not wearing a seatbelt at the time. Vladimir Guerrero led thousands of mourners through the streets of Uribe's hometown.

In 2018, Uribe's 1990 Fleer trading card began popping up on eBay priced at $500,000 or better, with dealers listing the card as super rare and a short print. This was not the case; despite the fact, some online listings through 2019 still list the card being worth hundreds of thousands of dollars.