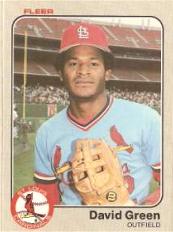 David Green, born in Nicaragua, was a highly talented player who played six seasons in the majors but never achieved the superstardom that was predicted for him. He had great tools but he also had personal problems that interfered with his success. As a prospect, he was regularly compared to Roberto Clemente.

Green was signed by the Milwaukee Brewers organization in 1978, only a couple of years after the first Nicaraguan-born player, Dennis Martinez, came to the majors. Green was touted as a "can't miss" prospect by the Brewers in the early 1980s, but they traded him to the St. Louis Cardinals in a seven-player trade involving Ted Simmons and Rollie Fingers.

Questions about his age surrounded Green. When he broke into the majors in 1981, he might have been the youngest player in the league, if he was truly born in 1960. The evidence suggests that it was 1959.

Green spent part of 1982 at Louisville, hitting .345 and slugging .575, and played half a season with the major-league Cardinals, later appearing in all seven games of the 1982 World Series. After playing for the Cardinals in 1983 and 1984, Green was traded in February 1985, thus missing the Cardinals' pennant-winning 1985 year. He was traded to the San Francisco Giants in the Jack Clark deal.

After the 1985 season he was traded back to the Brewers but ended up in Mexico, where he would play for parts of several other seasons. He went on to play in 1986 for the Kintetsu Buffaloes in Japan. In 1987 he played much of the season in the minors (hitting .356 for Louisville in 50 games), but came up for 14 games with the Cardinals, although he did not appear in post-season play with them. He continued to play in the minors through 1991.