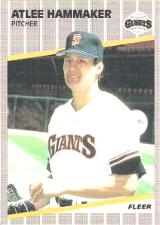 Atlee Hammaker pitched twelve seasons in the major leagues, and is best known for being the 1983 National League ERA champ. In addition, he was 10th in the league in ERA in 1987, and appeared in the 1989 World Series.

Coming from a military family, Atlee became a baseball star at a young age and played for the Woodlawn Little League in the U.S. Going to Mount Vernon (NY) High School, he became a star pitcher on a team that won the Northern Region Championship. He played football and basketball as well, but gave up football after he broke his leg.

In the 1978 Amateur World Series, Hammaker struck out 3 of 7 batters he faced and allowed only one baserunner (on a double). He allowed no runs in his lone outing. He was one of the less-used hurlers on Team USA, which won a Silver Medal.

Hammaker is one of only four major leaguers out of East Tennessee State University (through 2007), attending there in 1977-1979. The Kansas City Royals drafted him in the first round of the 1979 amateur draft.

By 1981 he was already up in the majors for 10 games with the Royals. He was five years younger than team closer Dan Quisenberry. Moving to the San Francisco Giants in the Vida Blue trade at the end of March 1982, he became a starter for the Giants, going 12-8 that year.

In 1983, Hammaker went 9-4 with a 1.70 ERA in the first half of the season and was named to the National League All-Star Team. He came into the game in the 3rd inning of the All-Star Game and allowed seven earned runs, including a grand slam (the first in All-Star Game history) by Fred Lynn, in just two-thirds of an inning. Through 2012, he still holds the record for most runs given up in one All-Star Game inning (Roger Clemens was second, with 6 in 2004). In the second half of the season, he went 1-5, and he never made the All-Star team again.

Hammaker stayed with the Giants from 1982 through most of the 1990 season, but only because he had been released or allowed to become a free agent a couple of times (in 1986 and 1987) and then re-signed with the Giants. He pitched for them in the postseason in both 1987 and 1989. He finished with a record of exactly .500 for three straight seasons from 1987 to 1989, with respective totals of 10, 9 and 6 wins. Finally, in August 1990 he was released again by the Giants and then signed by the San Diego Padres. He pitched in 10 games for the Padres in 1990 and 1991, and then finished out his major league career several years later with the Chicago White Sox in 1994 and 1995. He appeared in two games for the White Sox who were in first place in the AL Central when the strike interrupted the 1994 season.

Hammaker was troubled with arm injuries for much of his career after 1982.

He earned his first big league win with Kansas City on September 15, 1981. He pitched his first shutout on June 29, 1982. He pitched a two-hitter on April 17, 1983 as a member of the San Francisco Giants against the Cincinnati Reds. The two hits were singles by Johnny Bench and Dann Bilardello. He struck out 10 in the game.

The most similar contemporary pitcher (according to the similarity scores method) is Joe Magrane, who pitched for the Chicago White Sox the year after Hammaker was released from the team.

In December 2007, The Sporting News writer David Pinto did a statistical study of which pitchers lasted the longest after missing a full season. The conditions were that a pitcher had to (a) pitch in the modern era; (b) start at least 60 games before missing a season; (c) miss at least one full season; and (d) attempt a comeback no later than age 30. Of the 100+ pitchers on that list, Atlee Hammaker was the one who lasted the most seasons after his missed year, the year being 1986 in his case.