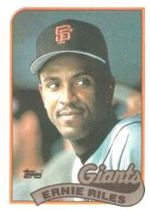 Ernest Riles spent nine years in the big leagues, mostly as a utility infielder. However, when he first came up with the Milwaukee Brewers in 1985, he was good enough to be the starting shortstop, the Brewers having just decided at the beginning of the year to move the incumbent, Robin Yount, who was in the middle of a Hall of Fame career, to the outfield. Riles had an solid rookie year, hitting .286 with 54 runs in 115 games (98 OPS+) and being named to the 1985 Topps All-Star Rookie Team, but he did not progress beyond that. In 1986 he fell to .252 and an OPS+ of 83 in 145 games, and played largely at third base in 1987 as Dale Sveum took over as the starting shortstop.

In the middle of the 1988 season, he was traded to the San Francisco Giants for Jeffrey Leonard. He was a member of the Giants' pennant-winning team in 1989 and played in that year's World Series. He played largely third base and second base that year, hitting .278 in 122 games with an OPS+ of 115, the highest of his career. However, he was 0 for 9 in the postseason.

He is an uncle of Willie Harris.