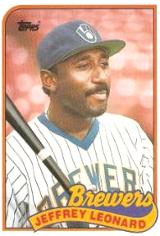 Outfielder Jeffrey Leonard spent fourteen years in the majors and was a two-time All-Star.

Originally signed by the Los Angeles Dodgers, Leonard reached the majors with the club in 1977, hitting .300 in 11 games. He was dealt to the Houston Astros for Joe Ferguson in 1978 and hit .385 in 8 late-season games for them. He was Houston's regular rightfielder in 1979, hitting .290 with 23 stolen bases, and was second in Rookie of the Year voting.

Early in the 1981 campaign, Leonard was traded to the San Francisco Giants. He developed into a power hitter, going from 9 homers in 1982 to 21 in each of the next two years. In 1987, he hit 19 home runs and appeared in his first All-Star Game. He also starred in that fall's NLCS, hitting .417 with 4 homers and being named series MVP despite the Giants losing.

After starting 1988 slowly for the Giants, Leonard was traded to the Milwaukee Brewers for Ernie Riles. He moved on to the Seattle Mariners as a free agent in 1989, hitting a career-high 24 home runs and appearing in the All-Star Game in his first year with the team. He retired following the 1990 season.

Leonard managed in the Oakland Athletics chain in 1997 and 1998. After coaching Antelope Valley Junior College for a couple years, he was hired to manage an independent team, the Reno Silver Sox, in 2008.

Leonard's nickname was "Prison Face" until 1987. After he asked to be called Jeffrey instead of Jeff, his teammates changed his nickname to "Penitentiary Face."