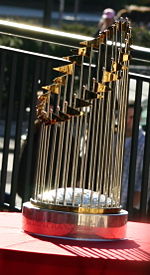 The World Series Trophy, technically known as the Commissioner's Trophy, is awarded each year by Major League Baseball to the team winning the World Series. It is presented to the ownership of the World Series-winning team by the commissioner. The trophy was first awarded in 1967, when the St. Louis Cardinals defeated the Boston Red Sox in seven games. Championship trophies were not unknown to baseball, although none had been awarded in over sixty years. Previous trophies include the Dauvray Cup from the 1880s, the Temple Cup from the 1890s and the 1900 Chronicle-Telegraph Cup.

The current trophy, is 24 inches tall, excluding the base, and 11 inches around and is made of sterling silver. The trophy features 30 gold-plated, hand-furled flags, one for each of the Major League teams, which rise above an arched silver ox baseball with latitude and longitude lines, symbolizing the world. The baseball also contains 24-karat vermeil baseball stitches. The trophy itself weighs approximately 30 pounds, with the baseball weighing over 10 pounds. The bases features two platforms of different sizes, and carry an inscription and the signature of the commissioner. The trophy has an estimated value of $15,000.

A new trophy is created each year and is often kept on display at the holder's ballpark and it is the only "major" American sport in which the championship trophy is not named after someone.