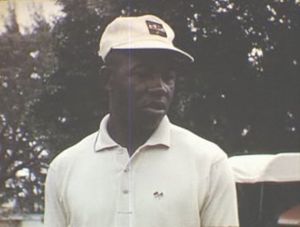 Jim "Junior" Gilliam is the only man to homer in both the East-West Game (1950) and All-Star Game (1959). He began his major league playing career with the Baltimore Elite Giants, then came into the National League with the Brooklyn Dodgers and remained with the team when they became the Los Angeles Dodgers. After his playing career ended, he was a Dodger coach for over a decade.

Junior played in black leagues from 1945 to 1951 (mostly with Baltimore, where he was a teammate of Joe Black - the Dodgers purchased both players as a package) and then in the minors with the Montreal Royals in 1951 and 1952. He was given the name "Junior" by George Scales during a tryout when he was 18 years old.

In a way, his career parallels the career of Jackie Robinson. Gilliam supplanted Robinson from second base when he was a rookie in 1953, and the Dodger great Robinson largely played third base and left field for the rest of his career. In time, Gilliam also moved to third base and to a lesser extent left field. Both were versatile, talented players. Like Robinson, Gilliam claimed the Rookie of the Year Award in his first season.

He drew 100 walks as a rookie, and then never got that many again, although he reached 90 walks in a season several times. In 1962, he batted behind Maury Wills in Wills' 104 stolen base campaign, then a single-season record. He applied several techniques at the plate intended to increase Wills' success: fouling off pitches when he thought the throw might get to the base before Wills, let hittable pitches go past when Wills had the chance to steal, and use the barrel of his bat to obscure the catcher's view on steal attempts as often as possible.

In the mid-1960s with Wes Parker at first base, Jim Lefebvre at second base and Maury Wills at shortstop, Gilliam was part of perhaps baseball's only all-switch-hitting infield.

His teammates nicknamed him "Devil," for something he used to say when hustling pool during spring training in Florida. He made a habit of mentoring young Dodger infielders, carefully socializing them to major league etiquette, teaching them about Southern race relations, and training them in fielding and batting techniques. He trained rookie Ted Sizemore (who had come up as a catcher) in the fine points of playing second base, and how to protect Maury Wills' base stealing attempts as a #2 batter. Sizemore went on to apply those techniques batting behind Lou Brock, and helped Brock to the speedster's 1974 then single-season stolen base record, breaking Wills' 1962 mark with 118 thefts.

Overshadowed by superstar teammates and low key to the point of being almost invisible in the media, Gilliam was a clubhouse favorite and known to possess a wicked sense of humor. Dodger catcher Johnny Roseboro in his autobiography recounts the time a runner going into second was knocked unconscious by the throw to first in a double-play attempt. While concerned players gathered around the fallen man, the laid-back Gilliam picked up the ball and tagged him to make sure one out was recorded. According to Roseboro, the Devil then chuckled and said, "First time I ever tagged out a dead man." (See Glory days with the Dodgers, and Other Days with Others, John Roseboro with Bill Libby, New York : Atheneum, 1978.)

When he died prematurely at age 50 in October, 1978, the Dodgers wore black arm-bands with his number on them during the 1978 World Series.

"Jim is one of those ballplayers who others followed because everything he did, he did in workmanlike fashion. He had a quiet voice when he talked, but . . . when he talked, you listened." - teammate Lou Johnson, quoted here [1]