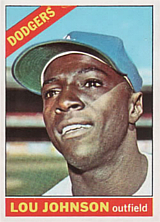 Lou Johnson was a key player on the Los Angeles Dodgers teams that won the 1965 World Series and played in the 1966 World Series. In the heart of the second dead-ball era, Lou's 12 home runs in 1965 tied for the team lead, and his .391 slugging percentage was the highest among the team regulars.

Johnson was not a regular before 1965, and played most of his career games in the period 1965-1968. In the 1965 World Series, he slugged .593, hitting two home runs. The second one was in Game 7 of the Series, off Jim Kaat of the Minnesota Twins, a game which the Dodgers won 2-0. He went 4 for 15 in the 1966 World Series against the Baltimore Orioles, leading the Dodgers in hitting and scoring one of the team's two runs as the team's bats were completely silenced by the Orioles' pitching.

He made one observer's "All Johnson Team" as a backup to the starting outfield of Lance Johnson, Alex Johnson, and Indian Bob Johnson. The DH was Cliff Johnson, and Deron Johnson was also on the bench.

He played in the Negro Leagues in 1955. He was signed originally by the New York Yankees in 1953, but did not break into the majors till 1960 with the Chicago Cubs, and did not become a major league regular until 1965.

Johnson succumbed to substance abuse, selling his World Series ring to help finance his habits [1]. He eventually cleaned up his act and landed a front-office job with the Dodgers in community relations.

Some thirty years after the Dodgers beat the Twins in the 1965 World Series, Dodger president Bob Graziano heard that the ring was about to go up for auction. In a singular act of baseball grace, he bought it and presented it to the overwhelmed Johnson. (This story is well known in Los Angeles. Here is a link to a religious view of loss and redemption, but the article also recounts the basics well. [2])

Despite his short tenure and what today may seem like meager statistics, Sweet Lou remains one of the most popular players in Los Angeles Dodgers history.

An obituary states that he had 17 years as a player in professional baseball and many more in the front office. He was called Sweet Lou because of his infectious smile and because he was always clapping. He broke a leg while playing in a game in 1967. [3]