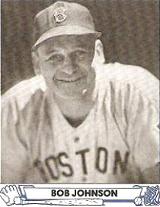 His partial Cherokee heritage earned him the nickname "Indian Bob". While playing semi-pro ball, his older brother Roy signed with the pros. Bob felt he was just as talented, yet struggled in several minor league tryouts. Time proved he was in fact much better, even though the pair retired with identical .296 big league batting averages.

Bob finally reached the professional ranks with Wichita in 1929. In 1931 and 1932, he became a high-average power hitter with Portland in the Pacific Coast League.

Johnson reached the majors as a regular in 1933 when the Philadelphia Athletics sold off future Hall of Famer Al Simmons in one of Connie Mack's periodic salary dumps. Starting at age 27, Bob would play 13 seasons in the majors. Highly productive in his prime, he hit 20 or more homers nine times, 30 or more three, and knocked in 100 or more RBI eight. He was durable and consistent, topping 125 in Adjusted OPS+ and getting at least at least 117 games and 438 at-bats in any season.

Defensively, he had a good arm and racked up over 200 outfield assists.

After his major league days he returned to the minors, still swatting at a .326 clip with Tacoma at 43 in 1949. He suited up for the last time in Tijuana in the Southwest International League in 1951.