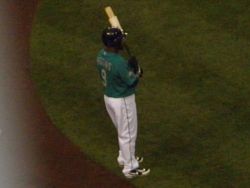 Desmond DeChone "Chone" Figgins pronounced his first name "Shawn". He played twelve years in the big leagues, mostly for the Los Angeles Angels of Anaheim, and was once 10th in the voting for AL MVP - in 2009, when he made the All Star team. Although he didn't usually lead the league in offensive categories, he was once the league leader in stolen bases and once in walks. His .330 batting average was sixth in the 2007 American League. He was a multi-position player, appearing in 640 games at third base, 279 at second base, 253 in center field, and at least 25 games at each of left field, shortstop and right field. He appeared in the 2002 World Series.

He is the brother of Angels scout Demetrius Figgins.

He became eligible for the Hall of Fame in its 2020 election but did not receive a single vote and was dropped from the ballot.