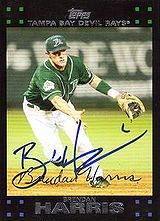 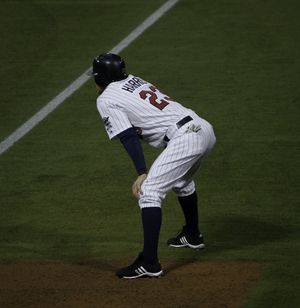 Middle infielder Brendan Harris played in the majors from 2004 to 2013 with six different major league franchises in seven cities. He moved around a lot in the major and the minor leagues and might be considered a modern version of Suitcase Bob Seeds, who got his nickname because he often moved from team to team.

Born in New York state, he went to Queensbury High School and then the College of William and Mary in Virginia.

While in high school, Harris was a star pitcher and led Queensbury to a New York state title game, which the Spartans lost.

He is one of only a handful of players from the College of William and Mary to make the big leagues; in 2006 he was joined by fellow graduates Chris Ray and Bill Bray. Harris was a 3rd team All-American shortstop in 2001.

He spent 2003 in the same place, with the West Tennessee Diamond Jaxx, hitting .280 with 34 doubles. The 2004 season saw him with the Iowa Cubs in Triple A, hitting .311/.353/.531 in 69 games. He made his major league debut in July of that year, appearing in 3 games. At the end of July, he was involved in a complex four-team trade that brought Nomar Garciaparra to the Cubs while Harris went to the Montreal Expos. He spent a month at their Triple A team, the Edmonton Trappers, hitting .285 with 6 home runs, and came up to the Expos for 20 games. He hit his first major league homer for the Expos at the tail end of 2004, off Josias Manzanillo of the Florida Marlins in the second game of a doubleheader on September 14th. He was one of three Expos players to hit their first major league homer in the doubleheader sweep that day, as Ryan Church had done so in the first game, and Val Pascucci joined him in the nitecap. He also became the Expos' final baserunner, earning a 9th-inning walk in their final game on October 3rd off Bartolome Fortunato of the New York Mets, but was stranded on base.

In 2005, the Expos moved to Washington, DC and became the Washington Nationals. He played most of that season for the Nats' Triple A club, the New Orleans Zephyrs, where he hit .270 with 13 home runs. He came up to the parent club for four major league games, hitting .333 with a homer and a double.

Before the 2007 season, Harris was purchased from the Reds by the Tampa Bay Devil Rays. St. Petersburg Times sports writer Marc Topkin, in a column published on June 24th that season opined that Harris, now a shortstop for the Devil Rays, could be a dark horse candidate for the 2007 All-Star Game: "Harris has emerged as one of the top performers at one of the league's showcase positions," Topkin wrote before going on to list Harris' stats: "He ranks third among AL shortstops with 8 home runs, fourth with a .310 average and an .843 OPS and eighth with 32 RBIs. Only Detroit's Carlos Guillen and Baltimore's injured Miguel Tejada also rank among the top eight in all four categories."

Topkin also quoted Tampa manager Joe Maddon expressing support for Harris' unlikely All-Star bid: "You look at (Harris') overall play and there’s a case to be made there," Maddon said. "Of course the name isn't glamorous, but he's been pretty darn good." Harris failed to make the All-Star team, but did hit .286 with 12 homers and 59 RBI in 137 games as the Rays' primary shortstop that first season as a regular. What was not stated by the enthusiastic journalist was that Harris' fielding at the position was well below average.

The re-named Tampa Bay Rays addressed their shortstop fielding problem by acquiring Jason Bartlett in a major trade with the Minnesota Twins the following off-season, and Harris was headed to yet another team, alongside OFs Delmon Young and Jason Pridie. With the Twins in 2008, Harris became a utility infielder, seeing playing at time at 2B, SS and 3B while playing in 130 games. Contrary to most utility infielders, Harris saw playing time because of his bat, not his glove, logging a .265 average in 434 at-bats. He played a similar role with the Twins in 2009, getting into 123 games with a .261 average. He got his first taste of postseason action that year, going 3 for 12 with a triple and an RBI as the Twins were swept by the New York Yankees in the ALDS. Just as he had seemed to establish himself as a useful major leaguer, Harris suffered a major setback in 2010: he hit only .157 in 43 games in Minnesota and spent a good chunk of the season with the AAA Rochester Red Wings, where he only hit .233 in 62 games. Danny Valencia largely took over his duties, and emerged as one of the best rookies in the American League that year, leaving Harris with no future in Minnesota. After the season, he was included in a trade to the Baltimore Orioles alongside SS J.J. Hardy in return for Brett Jacobson and Jim Hoey. He never played in the majors for Baltimore though, spending all of 2011 and 2012 in the minor leagues before returning to the big leagues with the Los Angeles Angels of Anaheim in 2013, where he hit .206 in 44 games. These were his last major league games.