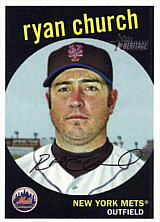 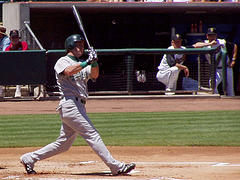 Ryan Church was a big league outfielder in parts of seven seasons.

Church was originally drafted by the Cleveland Indians in the 14th round of the 2000 amateur draft out of Nevada. He was signed by scout Paul Cogan and made his pro debut that summer. After four seasons in the Indians system, Church was sent to the Montreal Expos, along with Maicer Izturis, in return for lefty Scott Stewart after the 2003 season. He had always hit well in the Indians system: with the Mahoning Valley Scrappers in 2000, he hit .298 with 16 doubles and 10 homers in 73 games. In 2001 for Columbus and Kinston, he hit .278 with 30 doubles and 22 homers in 125 games. In 2002, for Kinston and AA Akron, he hit .307 in 124 games, with 29 doubles and 22 homers. In 2003, he hit .261 in 99 games for Akron, with 17 doubles and 13 homers. Moving to the Expos' organization he had another big year in his first season at the AAA level for the Edmonton Trappers. In 98 games, he hit .343, with 29 doubles, 8 triples and 17 homers, with 74 runs scored and 78 RBI before earning his first call-up to "The Show".

Ryan was one of the last players to make his major league debut for the Expos, late in the 2004 season. Despite going 3 for 4 in his first start in left field on August 22nd, he only hit .175 in 30 games that first year. The Expos became the Washington Nationals the following year and Church played regularly for them over their first three seasons in D.C., with batting averages of .287, .276 and .272. His home run total improved from 1 to 9 to 10 to 15 over his first 4 seasons. He hit two home runs on Easter Sunday in 2006, powering a 7-5 Nats victory over the Florida Marlins. In 2008, he was traded to the New York Mets, along with catcher Brian Schneider, for Lastings Milledge. He was having his best season that year as the Mets' regular right fielder, hitting .307 with 10 homers and 37 RBI in 57 games, when he went on the disabled list with a concussion in early June and again in July. Because the Mets have a history of doing foolish things with injured players, they initially let him get on an airplane with the head injury and he continued to play, finally adding him to the DL when he struggled not just playing but living his life. He came back in late August, but was not the same player, finishing at .276 with 12 homers in 90 games.

Church was back with the Mets in 2009 and off to a decent start when he was traded to the Atlanta Braves for Jeff Francoeur on July 10th; he was hitting .280 in 67 games at the time, then hit .260 for the Braves. He signed with the Pittsburgh Pirates in 2010, where he was a teammate of Lastings Milledge, the player he had been traded for two years earlier, but he hit only .182 in 69 games as a pinch-hitter and backup outfielder. At the trading deadline, the struggling Pirates sent him to the Arizona Diamondbacks, along with a couple of other unproductive veterans (Bobby Crosby and D.J. Carrasco) in return for Chris Snyder and Pedro Ciriaco. None of the players involved in the deal did much afterwards. Church, for his part, hit .265 in only 49 at-bats the rest of the year. He became a free agent, only this time his career was over.