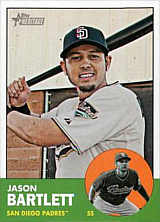 Jason Bartlett was drafted by the San Diego Padres in the 13th round of the 2001 amateur draft. He was signed by scout Lane Decker and made his pro debut that summer.

Although Bartlett was known first for his defensive prowess at shortstop, he tied a San Diego Padres team record in May of 2011 by driving in a run in 9 consecutive games. That matched streaks by Sixto Lezcano in 1982 and Steve Finley in 1996. It was doubly surprising as Bartlett was not really a run producer, and the Padres' offense was sputtering at the time. With the Tampa Bay Rays, Bartlett stole a base during the fifth inning of Game 1 of the 2008 World Series, becoming the second player in big league history to ensure America a free taco per Taco Bell's "Steal A Bag, Steal A Taco" campaign.

Bartlett's wife, Kelly, is the daughter of Tony Chevez, who pitched four games for the 1977 Baltimore Orioles.