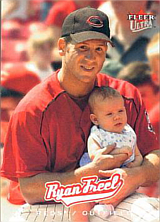 "He's a little guy who lives in my head who talks to me and I talk to him. That little midget in my head said, 'That was a great catch, Ryan,' I said, 'Hey, Farney, I don't know if that was you who really caught that ball, but that was pretty good if it was.' Everybody thinks I talk to myself, so I tell 'em I'm talking to Farney." - Freel, on the voice in his head (Farney) that he spoke to, as relayed in 2006 to the Dayton Daily News 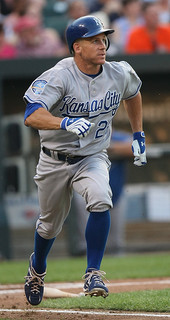 Originally thought of as simply a utility player, Ryan Freel became known for his speed and fearless playing style. He was dubbed by some a "poor man's Johnny Damon" for their similarities in on base percentage, speed, and intensity.

A native of Jacksonville, Florida, Freel attended Lincoln Memorial University before being selected by the St. Louis Cardinals in the 14th round of the 1994 amateur draft. He did not sign and went on to hit .364 with 15 runs and 7 steals for the silver medal-winning Team USA in the 1994 World Junior Championship. He attended Tallahassee Community College and was taken by the Toronto Blue Jays in the 10th round of the 1995 amateur draft. He made his pro debut the following summer with the St. Catharines Blue Jays. Despite missing much of the 1999 campaign with a shoulder injury, he steadily advanced through the Toronto chain, making the big league club's Opening Day roster in 2001 while Homer Bush was injured. He got into 9 games for the Jays that April, hitting .273 with 2 stolen bases, before spending the rest of the year with the Syracuse SkyChiefs.

Following the 2001 season, Freel became a free agent and signed with the Tampa Bay Devil Rays. He spent 2002 with the Durham Bulls, hitting .261 with 27 doubles, 8 home runs, and 48 RBI while leading the Tampa Bay organization with 37 steals. That fall, he joined the Cincinnati Reds as a free agent, and in 2003, he filled a utility role for the team, hitting .285 with 9 steals in 43 games while seeing time in the outfield, second base, and third base. He was Cincinnati's Opening Day center fielder in 2004 and also saw significant action at third base and right field that year. He had perhaps his finest big league season that summer, hitting .277 with 8 triples (fifth best in the National League and 37 stolen bases (fourth in the NL) in 143 games.

Freel stole 36 bases for the Reds in 2005 despite missing nearly two months of the season on the disabled list. As a testament to the uniqueness of his game, in that year's ESPN top plays per position countdown, he had two of the nine, one at third base and one in right field. He began 2006 in his usual utility role but became Cincinnati's starting right fielder in August after Austin Kearns was traded away. That year, he established a career-high with 8 home runs, while hitting .271 and once again stealing 37 bases. He was the club's Opening Day center fielder in 2007 but suffered a pair of injuries that summer. On May 28th, he collided with Norris Hopper, resulting in a concussion that caused him to miss more than a month. In early August, he tore cartilage in his right knee, putting him out of action for the rest of the season. His troubles continued into 2008, as he suffered a right hamstring injury on June 3rd that caused him to miss the remainder of the year.

Following the 2008 season, Freel was traded to the Baltimore Orioles. After beginning 2009 with the O's, he was dealt to the Chicago Cubs for Joey Gathright in early May and sold to the Kansas City Royals in early July. Let go by the Royals a month later, he moved on to the Texas Rangers organization, appearing in a pair of games for the Oklahoma City RedHawks. He briefly played for the Somerset Patriots of the independent Atlantic League in 2010.

Freel died of a self-inflicted gunshot wound in his hometown of Jacksonville on December 22, 2012. He was 36 years old. A year later, his family announced that he was suffering from chronic traumatic encephalopathy at the time of his death, likely a result of having suffered, by Freel's own admission, "9 or 10 concussions" in his life. The post mortem diagnosis, the first made on an ex-MLB player by Boston University's Center for the Study of Traumatic Encephalopathy and Sports, is usually associated with contact sports such as boxing, ice hockey or football.