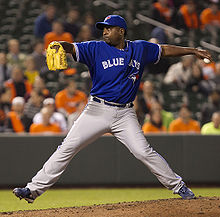 Darren Oliver pitched 20 years in the big leagues. He started in the majors as a reliever, then became a starter for many years, and from 2006 onward was a reliever.

Parts of 10 of his 20 seasons came with the Texas Rangers, pitching for nine big league teams overall. He almost became one of the heroes of the most important game in Rangers history, Game 6 of the 2011 World Series on October 27th, when the Rangers took a two-run lead against the St. Louis Cardinals in the 10th inning and were three outs away from securing the first Championship in franchise history. Manager Ron Washingtonsent Oliver to the mound as closer Neftali Feliz had blown a similar two-run lead in the 9th, and set-up man Mike Adams, the Rangers' second-best reliever, had already been used in the game. Oliver gave up back-to-back singles to Daniel Descalso and Jon Jay to start the inning, however, and after pitcher Kyle Lohse advanced the two runners into scoring position with a sacrifice bunt in a pinch-hitting appearance, Oliver was removed in favor off Scott Feldman, who allowed both inherited runners to score. Oliver was charged with a blown save, the Rangers gave up the game-winning run in the bottom of the 11th and the Cardinals won Game 7 to crush the Texans' dreams.

In 2012, Oliver moved to the Toronto Blue Jays, where he had another solid season at age 41, going 3-4, 2.06 with a pair of saves in 62 games. After the season, Oliver mused about retirement, but decided otherwise when he saw that the Jays were going all in to compete in 2013, making a couple of big trades, coupled with some free agent signings. On January 16th, he re-signed with the Jays for a 20th major league season, his last.

He is the son of 1970s first baseman Bob Oliver. Nolan Ryan played with both Bob and Darren Oliver. Oliver is the second player to have played for the four original expansion franchises (the Los Angeles Angels of Anaheim, Houston Astros, New York Mets and Texas Rangers); Ryan was the first. He became eligible for the Hall of Fame in 2019 but did not receive a single vote in his lone appearance on the ballot.