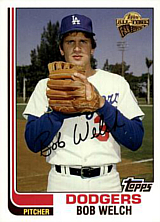 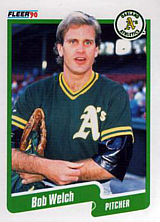 Bob Welch split his 17-year big-league career between two teams: the Los Angeles Dodgers and the Oakland Athletics. The slender right-hander with the violent leg kick gained instant notoriety as a 21-year-old rookie in 1978, striking out Reggie Jackson to put the capper on Game 2 of the World Series and preserving a Dodger victory.

In fact, in Welch's rookie season, he performed in every capacity: he started 13 games, relieved in 10, notching 3 saves as a result of his relief work. His famous confrontation with Jackson, who was probably baseball's most famous player at the time, occurred with the Dodgers nursing a 4-3 lead over the New York Yankees in Game 2 of the 1978 World Series. Terry Forster started the 9th inning by placing two runners on base while retiring one batter. Welch came on the mound to face Thurman Munson, who he retired on a fly ball to right, then Reggie Jackson, who he struck out on a full count after Reggie fouled off a number of pitches. That ending became an instant classic, and suddenly Welch was famous across the United States. He came back in Game 4, but was tagged with the loss when he allowed a walk and a pair of singles, including Lou Piniella's game-winner, in the 10th inning; he again relieved Forster with two men on and one out, in the 8th this time, and managed once again to get out of the jam with no further damage. Reggie got the best of him in Game 6, hitting a solo homer in the 7th inning, but the game was already out of reach by that point.

Bob's second season was very much the same as his rookie year, as he was a swingman, making 12 starts in 25 appearances and finishing at 5-6, 3.98. In 1980, he won a job in the starting rotation and was a solid number five starter behind Jerry Reuss, Burt Hooton, Dave Goltz and Don Sutton. Welch spent another full season as starter in 1981, with a solid record of 9-5, 3.44 in 23 starts during the strike-shortened season. Bumped from the starting rotation in the postseason, he made key relief appearances in all three Dodger wins in the 1981 NLCS against the Montreal Expos, including recording the final out and earning the save in the last. He also made a start in that year's World Series, but was yanked from the game after facing four hitters, retiring none. Between the 1979 and 1980 seasons, he sought treatment for alcohol abuse and made a successful recovery. He authored a book about his struggles with alcohol, Five O'Clock Comes Early: A Young Man's Battle With Alcoholism, published in 1982.

Despite the horrible Series outing (the Dodgers wound up winning it in six games, anyway), Welch remained a very dependable starter for the Dodgers, winning 15 games twice and even posting a remarkable 2.31 ERA in 1985, fifth best in the National League. On June 17, 1983 he pitched a shutout against the Cincinnati Reds and accounted for the game's only run with a homer; no pitcher would match that feat until Noah Syndergaard, in 2019.

On December 11, 1987, he was sent to the Oakland A's as part of a three-team, eight-player trade (the New York Mets were also involved). He responded with the best season of his career, posting a 17-9 record for the 1988 American League champions. He backed it up with another 17 victory season, along with a 3.00 ERA, as the Athletics won the World Series in 1989. He was slated to pitch the third game of that Series, but was skipped due to the 10-day layoff forced by the Loma Prieta earthquake. In 1990, he captured the AL Cy Young Award, winning 27 games against 6 losses, and posting a 2.95 ERA. No pitcher has won that many games in a season since.

Welch slipped to 12-13 in 1991, as the A's found themselves mired in a subpar season. It was also the sixth straight season of 200 or more innings for Welch, and the toll it took began to show the following season. Welch missed significant time with injuries, and made just 20 starts in 1992. He made his final appearance on August 11, 1994, in relief. Baseball went on strike the next day. The 37-year-old Welch called it quits right after that. During his time with the A's, Welch set the obscure all-time record for "most career games won, saved by the same closer". Dennis Eckersley saved 57 wins for him. In 2009, this record passed to Andy Pettitte and Mariano Rivera. In third place is his Oakland teammate Dave Stewart, for whom Eckersley saved 43 wins.

Welch was a member of the 2001 Arizona Diamondbacks coaching staff, and in 2006 he was the pitching coach for the Ogden Raptors in the Dodgers' chain.

The most similar pitcher to Welch is his Dodgers teammate, Orel Hershiser, based on similarity scores. The two were on opposing sides in the 1988 World Series but did not match up against each other. In their first year of eligibility for the Hall of Fame, Hershiser got 11% of the vote, while Welch got less than 1%.