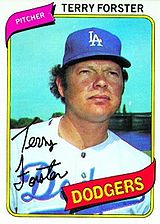 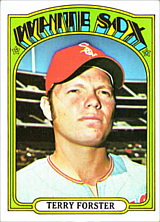 The rotund pitcher achieved notoriety for being called "a fat tub of goo" by David Letterman on Late Night in 1985. After the host apologized the next night, Forster, who had a gift of his own for one-liners and comedy, became a regular guest on Letterman's show. He turned his new-found celebrity into a musical gig, releasing an EP in '85 entitled "Fat Is In", credited to Terry Forster and the Lovehandles, whose title track was the lead single. Forster did not actually sing on the record, but contributed spoken words and shouts. The record failed to become a hit.

After being selected by the Chicago White Sox­ in the 2nd round of the 1970 amateur draft, Forster made his debut as a flame-throwing 19-year old in 1971, jumping straight to the Majors from Class A. He was a teammate of another youngster with an outstanding fastball, Rich Gossage, who joined the White Sox in 1972. Manager Chuck Tanner could not decide which of the two should be the closer, which explains in part why their save totals jumped up and down from year to year. Forster had three seasons of 20 or more saves (1972, 1974 & 1978), with a high of 29 in 1972 and an AL-leading total of 24 in 1974. In 1976, manager Paul Richards decided to use both Forster and Gossage as starting pitchers, with disastrous results: Forster had a 2-12 record, while Gossage was 9-17. After the season, the two were traded together to the Pittsburgh Pirates, and then became free agents after the season.

Forster signed a large contract with the Los Angeles Dodgers before the 1978 season and appeared in two World Series with them, in 1978 and 1981. Both times, he faced the New York Yankees and former teammate Gossage. He was slowed down by arm troubles after the 1978 season, pitching in only 26 games over the 1979 and 1980 seasons. He signed another free agent contract, with the Atlanta Braves, before the 1983 season, but after 13 saves that year, was mainly used as a LOOGY for the remainder of his career.

He was a good hitter for a relief pitcher: he hit .397/.412/.474 in 78 at bats, only striking out 9 times in his career. He appeared 5 times as a pinch-hitter, going 1 for 4 with an RBI and a sacrifice bunt. He collected a pinch-hit single and a stolen base (the only steal of his career) on October 3, 1972 while playing for the White Sox against the Minnesota Twins. The White Sox won the game, 5-4. That stolen base was the last by an American League pitcher until the start of interleague play in 1997. He also played one game in the outfield on July 1, 1977. This was necessitated by shortstop Frank Taveras being ejected in the 14th inning of a game against the Philadelphia Phillies; the Pirates had no position players left on the bench and had to use Forster in right field, moving right fielder Dave Parker to the infield.

After his playing career, Forster served as the pitching coach for the University of Ottawa.