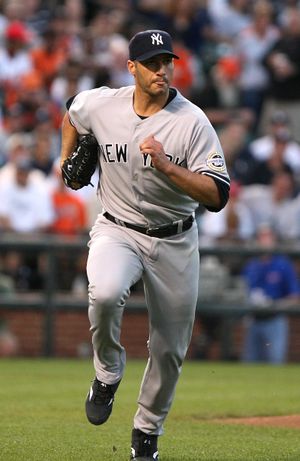 Andy Pettitte was one of the best pitchers in the history of the New York Yankees, but remains underrated: he never won the Cy Young Award or an ERA title, or led his league in strikeouts, and was only an All-Star twice. Although he never finished first in major pitching categories, he often was among the leaders. Pettitte achieved an extra measure of fame in 2004 when he moved from the New York Yankees to the Houston Astros, because it was he who gave Roger Clemens much encouragement to come to the Astros with him. After three seasons in Houston and a trip to the World Series with the team, he returned to the Yankees in 2007, winning a fifth World Series ring, and stayed there until his first retirement following the 2010 season. On March 16, 2012, he decided to come back after one year away from the game, signing a minor league contract with the Yankees with the understanding that he would be joining the starting rotation as soon as he had worked himself back into game shape. He pitched two more seasons before retiring for good at the end of 2013.

Pettitte was born in Louisiana in 1972, and attended Deer Park (TX) High School. He was at San Jacinto North Community College for a while. In 1990, he was drafted by the Yankees in the 22nd round, but waited instead until 1991 to sign with the Yankees and scout Mark Batchko as a draft-and-follow.

In his entire sixteen-year career in the majors from 1995-2010, he never had a losing season, coming closest in 2008, when he was 14-14 for the Yankees. He pitched in the postseason in 13 of his major league seasons. His last appearance before his first retirement was a losing start against the Texas Rangers in the 2010 ALCS. Overall, he was 19-10 in the postseason for a .655 winning percentage, even better than his excellent career .635 winning percentage in the regular season.

In his first return to the Yankees in 2007, he became the team's elder anchor on the mound, continually giving the team solid performances as teammates such as Mike Mussina, Chien-Ming Wang, Carl Pavano and Philip Hughes battled inconsistency and injuries. He passed the 200-inning mark in both 2007 and 2008. That season, he was given the honor of starting the last game ever played in Yankee Stadium on September 21st - a fitting tribute for one of the winningest pitchers in the history of the famed ballpark. He pitched five + innings against the Baltimore Orioles to earn credit for his team's 7-3 win. In 2009, he was a key figure in his team's conquest of another World Series title, going 14-8 during the season, and getting the series-clinching win in all three rounds of the postseason, including Game 6 of the World Series against the Philadelphia Phillies.

His 2010 season was cut short by injury, as he went 11-3 in 21 starts, with a 3.28 ERA, his best since 2005. He came back in time for the postseason, but after the season said he was thinking about retirement. He hesitated for months before making his decision to retire known at a press conference on February 4, 2011. That lasted only a year, as he announced a comeback before the start of the 2012 season. He seemed not to have missed a step, as it barely took a month of extended spring training and a few minor league assignments to get him ready to pitch in pinstripes again. He was called up to New York on May 8th and was handed the assignment as the team's starter for May 13th, against the Seattle Mariners. His return came at an opportune time, shortly after the Yankees had learned that prize off-season acquisition Michael Pineda would be lost for the season, and with Yankee starters struggling to a 5.54 ERA in the season's early going. He was a loser in his first start, giving up 4 runs in 6 1/3 innings to the Mariners, including long balls to Justin Smoak and Casper Wells. He was then outstanding in his second start, pitching four-hit ball over 8 innings for a 4-0 win over the Cincinnati Reds on May 18th. He suffered a big setback on June 27th, however, when he was hit by a line drive off the bat of the Cleveland Indians' Casey Kotchman, breaking his fibula. Hoping to return to action quickly, he began throwing off flat ground at the end of July, but pushed himself too hard, delaying his return until September. He finally came back on September 19th, pitching 5 innings and earning the win over the Toronto Blue Jays, 4-2, in the opener of a doubleheader sweep. He picked up another win in his next start on September 24th, pitching 6 scoreless innings over the Minnesota Twins to improve to 5-3. He finished the year at 5-4, 2.87 in 12 starts, then made a couple of starts in the postseason. He lost Game 2 of the ALDS to the Baltimore Orioles, 3-2, in spite of a solid start, and then got a no-decision in Game 1 of the ALCS against the Detroit Tigers, pitching 6 2/3 innings in a game the Yankees lost in extra innings.

Pettitte was back with the Yankees in 2013 and registered the team's first win of the year in its third game, facing the Boston Red Sox on April 4th. He gave up only 1 run in 8 innings, before turning the ball over to Mariano Rivera, who, just like in the good old days, recorded the save in his return from a serious knee injury that had almost ended his career the previous year. He also won his second start, but then had to have his next outing pushed back by a few days because of back spasms. He generally pitched well over the first six weeks of the season, as he was 4-2, 3.83 in 7 starts on May 16th. That day, however, he had to leave a game against the Mariners in the 5th inning with a back injury, bleak news for a Yankees team reeling with injuries (although still playing well at that point). Pettitte was placed on the disabled list the next day. He returned on June 3rd, with a chance to earn his 250th win against the Cleveland Indians, but he ended up one out short of the mandatory five innings required, and reliever Shawn Kelley was credited with the 7-4 win. He did win the milestone contest on June 8th, when he defeated the Mariners, 3-1. What made that day more memorable was that his son Josh, a standout high school pitcher, was drafted by the Yankees in the 37th round of the 2013 amateur draft that day; Josh was expected to forego the pros for now in order to enroll at Baylor University, however. On July 1st, he recorded his 1,957th strikeout to pass Whitey Ford and become the Yankees' all-time leader in that department. On September 20th, he announced that he would retire at the end of the season, joining his long-time Yankee teammate Mariano Rivera, although with his announcement coming late in the season, he received none of the extended tributes from opposing teams that were handed to Mo throughout the year. His last career start was a beauty; facing his former team, the Astros, on September 28th, he pitched a complete game and won, 2-1, to finish the season at 11-11, 3.74 in 30 starts. It was his first complete game since 2006, but Rivera had indicated that he had already pitched his last game, so Pettitte got to finish his own work. The Yankees had been eliminated from postseason contention a few days earlier, so there would be no more encores.

Having passed the 200-win mark in his mid-30's, Andy Pettitte still had a chance to reach 300 victories if he had continued pitching a few more seasons instead of first deciding to hang up his cleats in 2010. Even the 240 victories he had before his comeback, with his high winning percentage and experience with seven World Series teams, could have made election to the Hall of Fame a possibility. With his comeback, he added another 16 wins, putting him over the 250 threshold.

In 2007, Pettitte was named by the Mitchell Report as having taken Human Growth Hormone. He admitted to having done so shortly thereafter, saying it took place in 2002 while he was trying to recuperate from an elbow injury. In February of 2008, he also admitted to using it in 2004 after getting some HGH from his father in an attempt to recover from a tendon injury. That February, Pettitte also made the news when he said that Roger Clemens had told him that he had used HGH. When confronted about it, Clemens said that Pettitte had not recalled the conversation correctly.

Pettitte and Mariano Rivera set the record for win-save combinations by a pitcher duo, with 58, breaking the mark held by Bob Welch and Dennis Eckersley. That mark was pushed to 69 by the time Pettitte recorded his first win of 2013 with Mariano's help, and the two combined their efforts three more times during the season, pushing the mark to 72.

The Yankees retired his uniform number, 46, on August 23, 2015, and dedicated a plaque with his name in Monument Park. His was one of three numbers worn by members of the great Yankees teams of the late 1990s to be retired that year, alongside number 20 worn by catcher Jorge Posada and the 51 of Bernie Williams; Rivera's 42 had received the honor at the end of the 2013 season, when he pitched his last game, and still waiting was Derek Jeter's number 2, to complete the core of outstanding teammates who had played together with tremendous success for over a decade. That honor came in 2016. Pettitte first became eligible for the Hall of Fame in 2019, but had the bad luck of first appearing on the ballot at the same time as two clearly more qualified pitchers, Rivera and Roy Halladay, who were both elected that year. For his part, he received 9.9% of the vote. There were other good pitchers on the ballot, such as former teammates Mike Mussina - who was also elected - and Roger Clemens, as well as Curt Schilling. Still, he had managed to stay on the ballot for another try, when the competition among pitchers would be much less severe, giving him a glimmer of hope. He improved slightly in 2020, to 11.3% and in 2021, he went up to 13.7%. Ahead of him among pitchers were only Schilling and Clemens, down to their last year of eligibility, and reliever Billy Wagner, so there was an opportunity for him to make a significant move forward in future years.