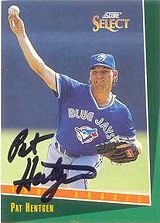 Pat Hentgen was signed by the Toronto Blue Jays and scout Don Welke as a 5th round pick in the 1986 amateur draft.

Hentgen won six straight games for the Blue Jays in 1997 and was named the July Pitcher of the Month in the American League. At one point in 1996, he threw five complete games in a row, on his way to winning the Cy Young Award. He went 20-10, 3.22 that season and finished ahead of Andy Pettitte of the New York Yankees in the voting.

Following the 1999 season, the Blue Jays traded him to the St. Louis Cardinals along with Paul Spoljaric in return for three players, none of which ever did much for Toronto. In St. Louis, Hentgen was back on a winning team and had his final strong season in 2000, going 15-12, 4.73 in 33 starts. It was a time when offensive numbers were through the roof, so his ERA was actually almost league average. He returned to the postseason one final time, but his only start went poorly, as he gave up 6 runs in 3 2/3 innings against the New York Mets in Game 5 of the 2000 NLCS, being charged with a 7-0 loss. He became a free agent after that season and signed a lucrative deal with the Baltimore Orioles, but he was never able to help them much, as he went 9-15, 4.26 in three seasons, missing large chunks of both 2001 and 2002 to injuries. In 2004, he returned to Toronto for one last hurrah, but he had little left by that point, ending up at 2-9, 6.95 in 18 games and making his final appearance on July 21st. Overall, he went 131-112, 4.32 in 14 major league seasons.

He mainly threw a rising fastball and a curveball.

Hentgen returned to the Jays as a member of the coaching staff, serving as the Bullpen Coach, for the 2011 season and again in 2013. He decided not to return for 2014, as he requested less onerous duties within the organization in order to be able to spend time with his seriously ill father.

He was inducted into the Canadian Baseball Hall of Fame as part of its 2016 class.