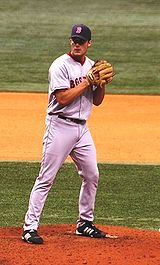 Javier Lopez was a prototypical LOOGY, a left-handed reliever with a sidearm pitching motion and a low release point who was very tough against lefthanded hitters, but vulnerable to right-handers. As a result, he averaged well under an inning per appearance in the major leagues and never started a game. He moved around a lot during the early part of his career before finding a long-term niche with the San Francisco Giants, where he was one of the best pitchers around to perform his very specialized role.

Lopez was selected by the Arizona Diamondbacks in the 4th round of the 1998 amateur draft, then was taken by the Boston Red Sox in the 2002 Rule V Draft. During the following spring training, he was traded to the Colorado Rockies for a minor leaguer and spent the entire 2003 season in the Rockies' bullpen, and was quite good, going 4-1 with a 3.70 ERA in 75 games. However, the 2004 season was a disaster, his ERA ballooning to 7.52 in 64 games, giving up 45 hits and 26 walks in 40.2 innings, against only 20 strikeouts. He only pitched 3 games in Colorado in 2005, being hit hard to the tune of a 22.50 ERA, before being placed on waivers. His original organization, the Diamondbacks, picked him up on April 14, and he pitched 29 games with them. His performance was nothing to convince them to keep him on the payroll: in 14.1 innings, he gave up 19 hits, 11 walks and 15 runs, putting up an ERA of 9.42. He became a free agent after the season and had to wait until early January to find a new team, the Chicago White Sox.

Failing to make the White Sox's bullpen out of spring training, he went to AAA Charlotte, where he was excellent, putting up an ERA of 0.55 in 26 games. On June 15, he was sent back to Boston in a minor league deal for fellow reliever David Riske, and pitched another 13 times at Pawtucket with a 4.86 ERA. Called up to the big club in late 2006, he was effective again, going 1-0, 2.70 in 27 games, even though he walked 10 batters in 16.2 innings. He pitched another 17 games in Pawtucket in 2007 before returning to Boston where he was a solid contributor in the bullpen, getting into 61 games with a 3.10 ERA. He got to play in the post-season for the first time, pitching a scoreless third of an inning against the Los Angeles Angels in the ALDS, but then faltering in Game 2 of the ALCS against the Cleveland Indians: relieving Eric Gagné with the score tied at 6-all, one out and 2 on in the 11th inning, he gave up a single to pinch-hitter Trot Nixon, a notoriously poor hitter against lefties, then uncorked a wild pitch for another run, and opened the floodgates for a seven-run inning. The loss was charged to Gagné, but Lopez was charged with 4 of the runs. In the World Series, he was no better, allowing base hits to both batters he faced in his only presence against his former teammates, the Colorado Rockies. Nonetheless, he got a ring as a member of the Red Sox second championship team in three years. He spent the entire 2008 season in the majors and had his best year, getting into 70 games with a 2-0 record and a 2.43 ERA. He was again roughed up in the postseason however, giving up a run on three hits in his only inning of work against the Angels in the ALDS, and then allowing 3 more hits in 1.2 innings against the Tampa Bay Rays in the ALCS. His problems continued in the regular season in 2009, with an 0-2 record and a 9.26 ERA in 14 outings. On April 30, he made a memorable presence in mop-up duty against the Rays, which was memorable for all the wrong reasons: he was unable to close out a 8-0 loss in the 8th inning, giving up 4 hits and a walk in 1/3 of an inning before an exasperated Terry Francona pulled him out of the game, but as the Sox were out of available substitutes, he was sent to right field from where he watched outfielder Jonathan Van Every get the last two outs of the game. After three more ineffective appearances, he was sent down to Pawtucket, where he made 38 appearances, going 1-1, 3.18.

A free agent after the 2009 season, Lopez signed with the Pittsburgh Pirates for 2010. He was effective once again, putting up a 2.79 ERA in 50 games to revive his career. Once again a valuable property, he was moved at the trading deadline, July 31, to the San Francisco Giants in return for P Joe Martinez and OF John Bowker. He became the sole lefty in the contending Giants' bullpen, as Jeremy Affeldt had been placed on the disabled list a few days earlier. He continued to pitch well for the Giants, going 2-0 with 1.42 ERA in 27 games. He continued his good work in the postseason, when he got into 9 games, giving up only 1 run on a hit and a walk in 5.2 innings as the Giants won the World Series. He was at his best in the NLCS: facing a Philadelphia Phillies team loaded with left-handed batters, he was called to work in 5 of the 6 games, and won one game, while giving up a single run in 4.2 innings. He seemed to finally find the success and consistency that had eluded him all those years in San Francisco, putting together back-to-back very good seasons in 2011 and 2012. He pitched 70 games both of those seasons, with ERAs of 2.72 and 2.50 respectively. In 2012, he was really used as a hard core LOOGY, pitching only 36 innings in 70 appearances, yet he still managed to pick up 3 wins and 7 saves. The Giants returned to the World Series, and while his help was not required in a four-game sweep of the Detroit Tigers during which the need for situational relievers never arose, he did pitch 5 times in the first two rounds of the postseason, keeping a clean sheet. He then went 4-2, 1.83 in 69 games for the Giants in 2013, logging 39 1/3 innings. After four solid consecutive seasons, the Giants decided he was a good risk going forward and on November 21st, signed him to a three-year deal for $13 million.

From 2014 to 2016, Lopez continued to pitch in his familiar role for the Giants, with 65, 77 and 68 appearances respectively. He had exactly one win each years, and one save, earned in 2016. In 2014, he was a member of a World series-winning team for the fourth time and made 9 appearances in the postseason, totally 2 2/3 innings. In the regular season, he did not break the 40-inning mark during that three-year stretch. His ERA rose up to 4.05 in his final season, and having become a free agent and not receiving any offers for the next year, he decided to retire at 38, having made 839 appearances in his career - all in relief - and logged 533 1/3 innings. He was second all-time in a category that best defines a successful pitcher of his type: most career appearances in which he faced only one batter and recorded one out. With 198, he was only 8 behind the all-time leader, Mike Myers.

The variations in success during Lopez's career may have been extreme, especially before 2009, but they are the lot of a specialist lefty's life. Because they pitch so few innings, in spite of making a lot of appearances, a few bad outings can completely turn around a season. Lopez was particularly vulnerable to these shifts in his first few seasons because his control was suspect, making him work on a perpetual tightrope: LOOGYs often come in mid-inning, and a mistimed walk or two can easily turn such situations into big innings. In later years, his walk rate improved slightly, but what really helped him was a rise in his strikeout rate, from under 6 per 9 innings to well over 7, meaning that he could now more easily get out of sticky situations with a timely strikeout.