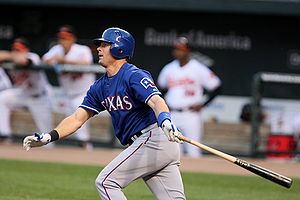 Michael Young of the Texas Rangers won the All-Star Game MVP Award in 2006 when he hit a two-run triple with two outs in the top of the 9th inning to give the American League a 3-2 victory. In 2010, he got his 1,748th career hit, breaking Ivan Rodriguez's Rangers record.

Young played for the Rancho Cucamonga Surfers in the California Fall League in 1999.

In spite of his success, Young has played three different positions for the Rangers over the years. He started out as a second baseman, but moved to shortstop when the Rangers acquired Alfonso Soriano from the New York Yankees in return for Alex Rodriguez. He then moved to third base in 2009 to make room for slick-fielding rookie shortstop Elvis Andrus, even though he had just won a Gold Glove at short. After the 2010 season, Rangers management asked him to move again, this time to DH, after they had signed free agent Adrian Beltre. This was the straw that broke the proverbial camel's back: after agreeing at first, he expressed reservations about making another move and asked to be traded. He explained that he had felt he had been misled and manipulated by the team, especially after they acquired C-1B Mike Napoli and said they would use him as their DH, meaning that Young would now be relegated to a "super-utility" role. However, by the time the season rolled around, Young, ever the consummate professional, had accepted his new role for the good of the team, and got back to his forte - hitting. He was second in batting average in the American League at the All-Star break, behind Adrian Gonzalez of the Boston Red Sox, and he was once again named to play in the mid-Summer classic. On August 7th, he collected the 2,000th hit of his career, in his 1,621st game, prompting talk that he had good shot at the 3,000 hit club.

On December 9, 2012, Young was traded to the Philadelphia Phillies for pitchers Josh Lindblom and Lisalverto Bonilla. He was the Rangers' all-time leader in hits, runs, doubles and triples at the time. He played regularly for the Phillies in 2013, mainly at third base, but also spelling out Ryan Howard at first. He got into 125 games before being traded to the Los Angeles Dodgers on August 31st. He was hitting .272 with 8 homers and 41 RBI before being acquired by the majors' hottest team in return for minor league P Rob Rasmussen. It was not clear what his role would be for his new team however, as the Dodgers were already loaded with infielders. In fact, he was principally a pinch-hitter for the Dodgers, although he started at least one game at each of the four infield positions during his month with the team. He hit .314 in 51 at bats, giving a batting line of .279/.335/.395 in 147 games, with 8 homers and 46 RBIs. He went 1 for 3 as a pinch-hitter against the Atlanta Braves in the NLDS, then was shut out in 7 at-bats in the NLCS against the St. Louis Cardinals.

After the season, he indicated that he was "seriously contemplating retirement" although a number of teams, including the Dodgers were interested in signing him for 2014. He made his retirement official at a news conference held at the Ballpark in Arlington on January 31st. He retired as the Rangers' all-time leader in a number of categories, including games played, hits and runs scored, in addition to seven seasons of hitting .300 or better. The Rangers paid him a special tribute on May 17th as they honored him before a home game. After the season, he rejoined the Rangers' organization as a special assistant to General Manager Jon Daniels; even before being hired, he had participated in the team's search process for a successor to manager Ron Washington. In his first year of eligibility for the Hall of Fame in 2019, he received 9 votes and dropped off the ballot. However, the Rangers paid him a huge compliment when they announced on June 18h that they would retire his uniform number, 10, that August.