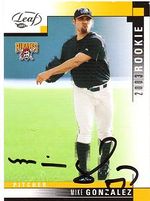 Gonzalez had a wild and wacky 2003. He began the year on the disabled list with back spasms and then went 0-1, 5.14 for Lynchburg and 0-0 with a save and 1.23 ERA for Altoona. In 7 games for the Nashville Sounds, he saved two and had a 4.50 ERA. In the middle of those Nashville appearances, though, Gonzalez was traded to the Boston Red Sox on July 22 with Scott Sauerbeck for Brandon Lyon and Anastacio Martinez. The Pirates said that Lyon was damaged goods, so 9 days later, Gonzalez and Freddy Sanchez were sent to Pittsburgh in return for Lyon, Martinez and Jeff Suppan. In the interim, Gonzalez had made two appearances with the Pawtucket Red Sox, saving one and allowing no runs. Overall, then, Pittsburgh had traded Sanchez for Suppan and Sauerbeck, a good move in retrospect, while Gonzalez got to spend a couple days out of the organization for the only time in the first decade of his career. Pittsburgh called Mike up shortly after reacquiring him, and he struggled in 16 appearances as a LOOGY, allowing a 7.56 ERA.

Gonzalez went 1-3 with three saves and a 2.70 ERA in 2005. He allowed a .152 average to lefties and had 10.44 strikeouts per 9 innings as one of the better left-handed relievers in the National League. Pittsburgh decided to make Gonzalez their closer in 2006 but brought in veteran Roberto Hernández for insurance. People claimed that you need a "closer mentality" or to be a "proven closer" to finish games, even though the vast majority of middle relievers and setup men tried in the closer role have succeeded very well. Through August 26, Gonzalez was 3-4 with a 2.17 ERA in 2006, with saves in his first 24 opportunities, setting a new Pirates record for consecutive save opportunities converted. He then was sidelined with elbow tendonitis and Salomon Torres replaced him in the closer role. After long trade discussions with the Atlanta Braves, Pittsburgh dealt Gonzalez and Brent Lillibridge for Adam LaRoche and Jamie Romak in January of 2007.

Gonzalez began 2007 in his usual dominating form, going 2-0 with 2 saves and a 1.59 ERA in 18 games. He had his third ERA+ over 200 in 4 seasons with over 10 innings of work to raise his career mark to a phenomenal 187. Unfortunately, Gonzalez began losing velocity on his fastball, which was timed at 82 mph. He stated that he had not thrown so slowly since high school. Two MRIs found nothing wrong before a more advanced MRI was done and detected a small tear in his ulnar ligament. Gonzalez had Tommy John surgery and missed the rest of 2007 and half of 2008 as well.