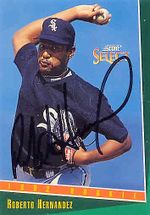 Pitcher Roberto Hernandez was signed as a 1st round pick in the 1986 amateur draft by the California Angels and scout Al Goldis.

He shares a name with Roberto Hernandez a contemporary pitcher who was known as Fausto Carmona during the time when both were active, having reverted to his real name a couple of years after the original Roberto Hernandez had retired.

The ballpark at the University of South Carolina Aiken was named after Hernandez in 1993. He became eligible for election to the Hall of Fame in 2013 but did not receive any votes and was dropped from the ballot.