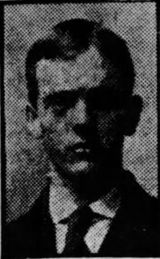 Harry Camnitz was the (three years) younger brother of Howie Camnitz. Harry pitched four innings with the Pittsburgh Pirates in 1909 and two innings with the St. Louis Cardinals in 1911. Overall, he had an ERA of 3.00. He also pitched eight years in the minors, winning 99 games. Most notably, he went 27-9 for the 1909 McKeesport Tubers before coming to the Pirates. 1909 was a great year for the Camnitz boys. In addition to Harry winning 27 games with McKeesport and coming up to the majors, Howie won 25 games with the Pirates and was in the World Series. Both were born in Kentucky, both attended Centre College in Kentucky, and both died in Louisville. Howie outlived Harry by several years.