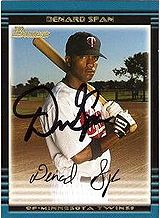 Outfielder Denard Span was a first-round pick in the 2002 amateur draft and made his major league debut six years later.

Span played for the US junior national team in the 2001 Junior Pan Am Games. He hit .450 with 12 RBI in 40 AB. He was third on the team in RBI behind Jeff Francoeur and Mike Nickeas, beating out B.J. Upton among others. Span helped the US win its first Silver Medal ever in the event and joined teammates Nickeas, Francoeur, Nick Crowe and Jeremy Sowers on the tournament All-Star team.

In high school in 2002, Span batted .490 with 24 steals. The Minnesota Twins took him in the first round of the 2002 amateur draft, 20th overall and the third outfielder picked after college players Jeremy Hermida and Nick Swisher and 3 spots before Francoeur. Span was signed by scout Brad Weitzel for a $1.7 million bonus.

He began 2005 with the Ft. Myers Miracle, with whom he hit .339/.410/.403 and made the Florida State League mid-season All-Star team before being promoted to the AA New Britain Rock Cats in June. He hit .285/.355/.345 in 68 games for New Britain. His composite .307 average led Twins farmhands. Baseball America rated him as the #7 prospect in the Florida State League and #14 in the Eastern League. Had he qualified, he would have led the FSL in batting average.

Span was traded to the Washington Nationals in return for minor leaguer Alex Meyer before the 2013 season. That year, he had the longest hitting streak in the majors in August and September at 29 games, beating out former teammate Michael Cuddyer who had put together a 27-game streak earlier in the year. The streak was one shy of the Nationals record of 30, set by Ryan Zimmerman in 2009. He hit .279 in 153 games with a National League-leading 11 triples. He had 170 hits, scored 75 runs and had 20 stolen bases in 26 attempts. In 2014, he tied former Twins teammate Ben Revere for the ML lead in hits with 184, scored 94 runs and hit .302 with 39 doubles and 31 steals in 38 attempts. His excellent performance contributed to the Nationals winning the NL East division title. In the Division Series against the San Francisco Giants, he only went 2 for 19 with a walk as Washington made an early exit. His 2015 season was wrecked by injuries, however, mainly back and abdominal issues that kept him out from July 7th to August 25th. He was playing well before that, hitting .304 in 59 games. He played two games after returning, but then went right back to the DL on August 27th, this time with inflammation to his left hip, an injury that appeared related to the previous ones. His season was over, bad news for the team, as it had struggled badly in his absence. In deed, the Nats were badly distanced by the New York Mets over the last month of the season, with Span unable to play, and missed the postseason altogether. 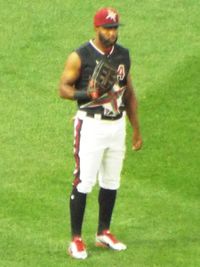 Span became a free agent after the 2015 season and was pursued by a number of teams. On January 7, 2016, he signed a three-year deal with the San Francisco Giants for $31 million. On Opening Day, April 4th, he drove in 5 runs and hit the first of three consecutive homers by Giants players off Milwaukee Brewers reliever Ariel Pena in the 8th inning to begin his career with his new team with a flash. The Giants won the game, 12-3. He played 143 games, hitting .266 with 11 homers and 53 RBIs and scoring 70 runs. He also went a combined 5 for 19 in the postseason, scoring 3 runs, all in the Giants' loss to the Chicago Cubs in the Division Series. In 2017, he improved to .272 with 12 homers and 43 RBIs with 73 runs in 129 games, while his OPS+ climbed from a disappointing 93 to an even 100. With the Giants trying to re-stock after a 98-loss season, he was traded on December 20th to the Tampa Bay Rays along with IF Christian Arroyo and prospects Matt Krook and Stephen Woods in return for 3B Evan Longoria. It was not clear, however, if the Rays really wanted to have him in their starting line-up or would instead prefer to flip him to another team with more immediate plans to contend for the postseason. It turned out that his stay with the Rays was indeed short, as on May 25, 2018, he was traded again, this time to the Seattle Mariners, joining closer Alex Colome in a deal for Ps Andrew Moore and Tommy Romero. In 43 games for Tampa Bay, he was hitting .238 with 4 homers and 28 RBIs.

"When I lead off a game, that at bat doesn't belong to me. That at bat is for my teammates. I'm trying to get on base for them any way I can. And I'm trying to make the pitcher show his slider or his changeup before he really wants to." - Span in the April 5, 2010 Sports Illustrated.