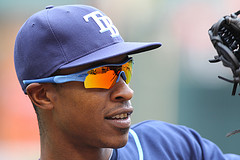 Melvin Upton was considered throughout his minor league career as being one of the top few, even the top, prospect in the minors. He was drafted second overall in the 2002 amateur draft by the Tampa Bay Devil Rays.

For most of his career, he was known by the nickname "B.J.", which stands for Bossman Junior; his father's nickname is, of course, Bossman. His younger brother Justin was the #1 overall pick in the 2005 draft by the Arizona Diamondbacks. Both brothers were drafted as shortstops, but were moved to the outfield. Melvin was first tried at third base and second base, where he made too many errors to stick, and wound up in center field in 2007, a position where he could put his outstanding speed on display on defense.

Upton has shown a lack of hustle at times, something which he has received some criticism for. Despite being in the middle of an intense pennant race, in August of 2008 he was benched three times by manager Joe Maddon within a span of two weeks for 1) failing to run out a grounder back to the pitcher, 2) failing to run out double play grounder, and 3) getting tagged out after lackadaisically jogging into second base on a drive off the left field wall. After missing a month of the season with an injury, he was at his best during the postseason however, hitting seven home runs between the ALDS and ALCS. He failed to hit a long ball in the World Series against the Philadelphia Phillies, but showed some outstanding speed, stealing four bases in key situations, including one with two outs in the 6th inning of Game 5, in a driving rain; he came to score on Carlos Pena's single, tying the game before it was suspended for 48 hours.

It was thought that this sort of "coming out" in the 2008 postseason would launch Upton's career as a true superstar, but his play continued to be up-and-down over the next few seasons, frustrating Rays' fans and management. In 2009, he hit .241 with 11 homers; he did score 79 runs and steal 42 bases, but the season was considered a disappointment. In 2010, the Rays returned to the postseason, but Melvin's batting average was even lower, at .237. However, he did a lot of other things very well that year to compensate, such as hitting 38 doubles and 18 homers, scoring 89 runs and stealing 42 bases while being caught only 9 times. In the ALDS, he was only 4 for 21 and did not score a run as the Rays bowed out to the Texas Rangers in 5 games.

The frustration continued in 2011, as the Rays were outdistanced by the New York Yankees and Boston Red Sox in the season's early going. Upton's batting average remained in the .220s for most of they year, the fourth consecutive year of decline after hitting .300 in 2007. There was widespread speculation that the Rays were planning to cut ties with him. However, the Rays began to play much better in August, and by the time they were in a dogfight with the Red Sox for the AL Wild Card in early September, he was a key contributor. He reached totals of 20 homers and stolen bases for the second time of his career, joining his brother Justin who had done so with the Diamondbacks earlier in the season. They became the first set of brothers to post 20-20 seasons the same year; they were already only the 6th set of brothers to have each had such as season. He also reached base in a team-record 9 consecutive plate appearances on September 11-12; the streak came during a five-game winning streak that brought the Rays to within 3 games of the BoSox. He finished the year batting .243/.331/.429 in 153 games, with 36 steals and 23 homers, then went 4 for 14 with 3 doubles as the Rays bowed out to the Texas Rangers in 4 games in the ALDS after clinching the wild card spot on the season's last day.

On March 14, 2012, Melvin collided with Desmond Jennings in the outfield during a spring training game. He hurt his back and did not play again during the exhibition season, then began the year on the disabled list. He was back in the line-up before the end of April and reclaimed his customary spot as the team's center fielder. On August 3rd, he hit the 100th homer of his career on the same day as his brother Justin. Justin was the first to the mark, hitting his milestone blast off Kyle Kendrick of the Phillies in the 2nd inning of the Diamondbacks' 4-2 win, then barely an hour later, Melvin hit his 100th off Tommy Hunter of the Baltimore Orioles in the 4th inning of a 2-0 win. He finished the season with a batting line of .246/.298/.454 in 146 games, with 29 doubles, 28 homers, 79 runs, 78 RBI and 31 stolen bases. He became a free agent after the season and signed a five-year contract with the Atlanta Braves on November 28th, worth $75.25 million­. He was to replace Michael Bourn as the Braves' starting centerfielder. On January 24, 2013, he was joined in the Braves' starting outfield by his brother Justin, acquired that day in a seven-player trade with the Arizona Diamondbacks.

Melvin hit his first homer as a Brave on April 6, 2013 when he led off the 9th inning by going deep against Carlos Marmol of the Chicago Cubs to tie the score at 5-all; a couple of batters later, his brother Justin followed suit, giving the Braves a come-from-behind win. It was the first time since May 28, 1996 that two brothers had hit homers in the same inning, when Billy and Cal Ripken had done so for the Baltimore Orioles. The brothers went one better on April 23rd, as they went deep back-to-back in the second game of a doubleheader sweep of the Colorado Rockies. Melvin led off the 5th inning with a long ball against Jon Garland, and Justin followed by going deep on the next pitch. It was only the second time in major league history that brothers had gone deep in succession; Lloyd and Paul Waner of the Pittsburgh Pirates had done so on September 15, 1938.

When he and Justin both homered in a game on June 24, 2014, it marked the fourth time they had done son in a game for the Braves, tying the major league mark for brothers. Wilton­ and Vladimir Guerrero and Jason and Jeremy Giambi also performed the feat four times. In the Uptons' case, the first three instances came within their first 20 games for the Braves, and the next occurrence had to wait over a year. They became the sole holders of the record when they both homered in a 7-6 win over the Washington Nationals on August 8th. This was however a rare highlight in another difficult season, as he hit only .208 in 141 games with 12 homers and 35 RBIs. His season was slightly better than his first one with the Braves - his OPS+ rose from a dismal 54 to a bad 75 - but his production was still well below what the Braves were expecting.

Before the 2015 season, the brothers were (it seemed) separated once again as Justin was traded to the San Diego Padres. The elder Upton decided to turn a page by asking that he now be called by his proper first name, "Melvin", and not by the nickname he had used since he was in high school. The change did not bring him much immediate luck, as he was soon out of action for the whole spring because of inflammation in his left foot. On the eve of the season on April 5th, the two brothers were re-united, however, as the Braves traded Upton along with closer Craig Kimbrel to the Padres for outfielders Carlos Quentin and Cameron Maybin, prospects Matt Wisler and Jordan Paroubeck, and the 41st overall pick in the 2015 amateur draft. However, Melvin was not expected to make his debut until May, because of his spring injury. Indeed, his first game as a Padre came on June 8th. He did experience a rebirth that season, as he played regularly over the second half and hit .259 with 5 homers and 17 RBIs. The numbers may not have looked too impressive, but they were good for an excellent OPS+ of 111 given the tough hitting context in Petco Park. In 2016, he continued to be a solid contributor, hitting .256 with 16 homers and 45 RBIs in 92 games for the Padres. The numbers may have looked better than the previous year's, but because Petco had improved very significantly as a hitting environment between the two seasons, his OPS+ was just 100. In any case, the Padres were looking to rebuild, and on July 26th, he was traded to the Toronto Blue Jays in return for Rookie-level pitching prospect Hansel Rodriguez. He was expected to see most of his action in Toronto as a platoon player against lefthanders, and as a defensive replacement in the outfield. In 57 games, he hit .196 with 4 homers and 16 RBIs. He also added a couple of hits, including a homer in the Jays' three-game sweep of the Texas Rangers in the Division Series.

Upton went to spring training with the Blue Jays in 2017, but on April 2nd, the day before the season was set to open, he was handed his release. On April 12th, he signed a minor league deal with the San Francisco Giants. He played just 12 games for the Sacramento RiverCats, however, hitting .244, before his season ended because of thumb and shoulder injuries. He was given his release on August 21st. The following December, the Cleveland Indians signed him to a minor league contract as a reclamation project but he was released before the end of spring training in 2018.

In January 2019, he stated that he was going back to using "B.J." as his primary name, at the request of his wife.