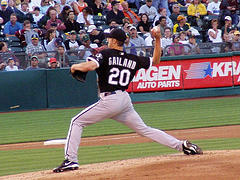 Garland was selected by the Chicago Cubs in the first round of the 1997 amateur draft. Despite being a highly touted Cubs prospect, he was traded across town to the Chicago White Sox for Matt Karchner the following year.

He made his big league debut with the White Sox in 2000, made 13 starts for the club at the age of 20, and was the youngest pitcher in the majors that year. That year was a year in which many young White Sox players made their mark ("The kids are good!", one opposing player said about them). Led by Magglio Ordonez, Paul Konerko, Mark Buehrle, Carlos Lee, and Frank Thomas, the team won the division title, but Garland did not appear in post-season play.

After beginning the next season (2001) with the AAA Charlotte Knights, Garland was recalled in May and stuck with the Sox for the rest of the season. He went 6-7, starting about half the time, but also getting one save.

In 2002, he joined the team's rotation for good, and in each of the next three seasons he won 12 games and had an ERA very close to the league average. Each year, his won/loss record was at .500 or was only one game away from .500. 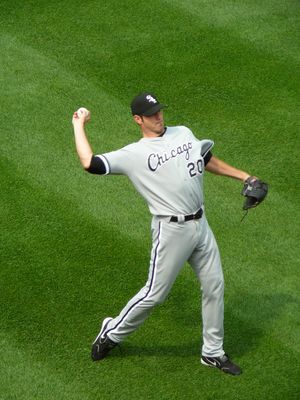 Garland had a breakout season in 2005, starting the season 7-0 and making the All-Star team for the first time. He ended the season with 18 victories, but in the second half of the season, he was less effective, as he ended with 11 losses. The White Sox destroyed their opponents in the postseason, and Garland pitched well. In the ALCS, he hurled a complete game in Game 3 and got the win. In the World Series, he gave up only 2 runs in 7 innings in his only start. He was sixth in the Cy Young Award voting that season.

Garland began the 2006 season slowly. He had an 8-3 record in the first half but posted a 5.37 ERA. In the second half, he heated up, going 10-4 with a 3.61 ERA. Overall, he won 18 games to lead the Sox staff. He also hit a home run in a game against the Cincinnati Reds, the first White Sox home run by a pitcher in the DH era.

In 2007 Garland had a record of 10-13 as he registered only 98 strikeouts. Never a big strikeout artist, his ratio of strikeouts was only 4.23 per nine innings, lowest by far among the starting rotation. After the season, he was traded to the Los Angeles Angels for shortstop Orlando Cabrera. He pitched decently for the Angels in 2008, going 14-8, 4.90 in 32 starts, but he was not used in the postseason. A free agent after the season, he generated only limited interest, in spite of his solid track record as an inning-eating starting pitcher. He found a job with the Arizona Diamondbacks and went 8-11 for them over 27 starts in 2009, with a 4.29 ERA. He was traded to the Los Angeles Dodgers towards the end of the season and did well for his new team, going 3-2 with a 2.72 ERA in 6 starts. However, for the second consecutive year, he was not used in the postseason. Once again a free agent, he signed with the San Diego Padres where he was the mainstay of a young rotation in 2010. He made 33 starts, pitched 200 innings, and went 14-12, 3.57, with 136 strikeouts. After the season, he returned to the Dodgers, signing a one-year deal as a free agent.

Garland went 1-5 in 9 starts for the Dodgers in 2011, pitching 54 innings until being shut down on June 1st, when he needed to undergo shoulder surgery. He then missed all of 2012, and in 2013 went to spring training with the Seattle Mariners with the hope of making the team's starting rotation. However, when it became clear that this would not happen, he decided to opt out of his contract on March 22nd in order to seek another major league team which may be interested in having him as a starter. He had pitched quite well that spring, putting up an ERA of 2.25 in 4 starts. He did not stay unemployed for long, signing with the Colorado Rockies two days later. He then went 4-6, 5.82 in 12 starts for Colorado in what was his final major league season.

Garland is the cousin of former minor leaguer John Bushart.

He became eligible for the Hall of Fame in 2019 but did not receive a single vote in his lone appearance on the ballot.