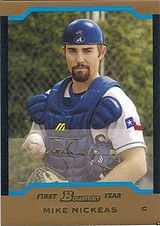 Mike Nickeas played seven minor league seasons before spending four years in the majors. He has played for the USA and England in international events.

Nickeas is the son of a British professional soccer player, Mark Nickeas, who moved from England to Vancouver, BC to play for the Vancouver Whitecaps of the North American Soccer League in the 1970s. Mike was born there and the family settled in North America after Mark's playing career ended.

Mike opted for baseball instead of soccer and performed very well. He set his high school's record with 98 career RBI. In 2001, he was on the US Junior national team. He hit .577 and slugged 1.038 in the Junior Pan Am Games and scored 16 runs while driving in 13. He was the tournament leader in batting average, runs and slugging, outperforming teammates such as Jeff Francoeur and B.J. Upton as well as Yulieski Gourriel. He was named to the All-Tournament Team at catcher, but failed to win MVP honors as Kendry Morales of Gold-winning Cuba took the award.

Nickeas hit .333/.398/.502 as Georgia Tech's starter and followed by hitting .364 in the Atlantic Coast Conference Tournament. He tied for 12th in the ACC in average. With Team USA's college edition that summer, he hit .303, 4th on the team and ahead of Dustin Pedroia, Brent Lillibridge or Eric Patterson. Nickeas split catching duties with Jeff Clement. He helped the US win Silver in the 2003 Pan American Games.

Nickeas debuted professionally with the Spokane Indians, batting .288/.384/.494 with 55 RBI in 61 games. He led the Northwest League catchers with 419 putouts and tied Brandon Green for third in the NWL in RBI, trailing Chris Carter by 8 and Travis Metcalf by 7. Nickeas was named to the NWL All-Star team at catcher. Baseball America rated him as the league's #19 prospect, trailing Kurt Suzuki (#12), Landon Powell (#16) and Orlando Mercado Jr. (#18) among backstops.

On August 30, Texas traded Nickeas to the New York Mets in exchange for Victor Diaz. He was 2 for 12 with the Binghamton Mets after the deal.

In 2007, Mike went to spring training with New York. In the regular season, he struggled with Binghamton (.217/.281/.278 in 65 games) and the St. Lucie Mets (.208/.378/.299 in 26 games). In the 2007 European Championship, Nickeas played for his father's native country, Great Britain. He helped them to their first Silver Medal ever in a European Championship, batting .424/.487/.606 with 10 RBI in 8 games as Britain's cleanup hitter, providing protection for #3 batter Brant Ust. Nickeas was only held hitless in the Gold Medal game, when David Bergman and two relievers won it for the Netherlands. His 14 total bases in the event were second only to Ust, the MVP. Nickeas was named to the All-Star team at catcher. Great Britain qualified for the 2008 Final Olympic Qualification Tournament but later withdrew for financial reasons.

In his MLB debut on September 4, 2010, he started at catcher and hit 7th. His first time up, he grounded into a double play against Carlos Zambrano of the Chicago Cubs, and he flew out the next trip to the plate. He left for PH Josh Thole in the 7th. One player, Starlin Castro, tried to run on Nickeas, and stole successfully. He played 5 games that season, hitting. 200. In 2011, he hit .189 in 21 games in the majors, with his first career home run. He also had 60 games at Buffalo, where he hit only .214 with a pair of homers and 15 RBI.

Nickeas was hitting well below .200 on May 26, 2012, when he hit his first career grand slam, connecting off Dale Thayer of the San Diego Padres to clinch a 9-0 win for the Mets. He finished the season hitting .174 in 47 games as Thole's main back-up behind the plate. He also played 22 games at Buffalo, hitting an uncharacteristic .364. After the season, on December 16th, he was traded to the Toronto Blue Jays in a major deal also involving Thole and Cy Young Award winner R.A. Dickey heading to Toronto in return for Cs John Buck and Travis d'Arnaud, and pitchers Wuilmer Becerra and Noah Syndergaard.

Returning to Georgia Tech to finish his degree, he became an assistant coach at his alma mater in 2016. He then coached for Britain in the 2016 World Baseball Classic Qualifiers.