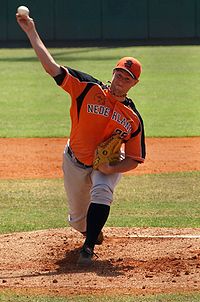 He was on the Netherlands youth national team from 1997 through 1999, during which they won three European titles. Bergman made his Hoofdklasse debut with the 2003 Pioniers, going 8-4 with a 2.22 ERA. He was fifth in the league in ERA, tied Dave Draijer for fourth in wins and was fourth with 71 strikeouts. In the 2003 European Championship, he won his only game, pitching five scoreless innings. He pitched four scoreless innings and got a save in the 2003 World Port Tournament. He pitched for the Netherlands in the qualifying tournament for the 2004 Olympics, though he did not make the Dutch squad for the Olympics themselves.

At age 24, he represented the Netherlands in the 2006 World Baseball Classic, allowing 4 hits and one run in 1 1/3 relief innings against Puerto Rico. Moving on to Kinheim and getting more support, David was 12-1 with a 1.94 ERA in 2006. He was 5th in Hoofdklasse in ERA, tied Patrick Beljaards and Diegomar Markwell for the win lead and led in winning percentage. His 72 strikeouts ranked fifth in the circuit.

David was 2-0 in the 2006 Intercontinental Cup, allowing no runs in 11 innings. He tied for the tournament lead in wins and ERA.

Bergman beat USA's college national team when the Dutch national team made a visit to the US in 2007. It was just the 4th time in 25 games in the past five years that the Netherlands had beaten the US. He allowed no runs in 6 in a 9-3 win.

In the 2007 European Cup, Bergman was the top pitcher in the tournament, allowing no earned runs in 10 innings to help Kinheim win its first European Cup ever. Bergman was 1-0 and allowed only 5 hits and a walk in the event. He was 1-0 with a 2.53 ERA in the 2007 World Port Tournament.

Bergman got the start in the Gold Medal game of the 2007 European Championship. He carried a no-hitter into the 7th against Great Britain as the Dutch won, 6-1. He went 2-0 with a 1.38 ERA on the tournament - it was the second-highest ERA on the Dutch staff. He made the All-Star team for the tourney. The victory helped the Dutch clinch a spot in the 2008 Olympics.

Bergman got a historic win in the 2007 Baseball World Cup, when he pitched 2 1/3 perfect innings in relief of Diegomar Markwell as the Dutch beat the Cuban national team 2-1. Bergman got the heart of the Cuban order - Yulieski Gourriel, Alexander Mayeta and Frederich Cepeda - in order in the 9th. It was the first time the Netherlands or any European team had ever beaten Cuba in the Baseball World Cup. He held Team USA to one run in first 7 innings in the semifinals only to lose to Matt Wright. He was 1-1 with a 5.68 ERA overall in the event despite the two fine outings.

Bergman had a 0.00 ERA in 9 innings in the 2008 European Cup in Grosseto and was 1-0, working well against the Marlins Puerto Cruz and Rouen Huskies to help Kinheim win the Cup. He tied Jason Kosow for the Cup lead in ERA.

Bergman's 13.52 ERA was the highest on the Dutch squad in the 2008 Olympics; he was 0-1 with a save and allowed 9 hits and 4 walks in 4 2/3 IP. He failed to last 4 innings in his start against Taiwan, a team the Netherlands had outperformed in the last two World Cups and most recent Intercontinental Cup. He pitched poorly in relief against both Cuba and China, though he did get the save in the latter game, locking up the only Dutch win in Beijing.

In the 2008 Hoofdklasse, Bergman was 8-1 with a 1.42 ERA. He was second to Rob Cordemans in ERA, tied Mihai Burlea for second in opponent average (.199, behind Cordemans), was second in opponent OBP (.276, behind Cordemans) and tied Roger Kops for 6th in wins. He was less effective in the postseason, splitting two playoff decisions. In the 2008 Holland Series, the Amsterdam Pirates lit him up for 16 hits and 8 runs in 7 2/3 IP as he pitched in game one then lost game 3 on short rest.

David was with the Orange in the 2009 World Baseball Classic, giving up 8 hits and 3 runs in 5 innings of work. He had a scoreless relief stint against Puerto Rico but gave up 2 runs the next time he faced them, both related to a Alex Rios triple; against the USA, he allowed one run.

In the 2009 European Cup's Matino phase, Bergman allowed two runs in six innings to pick up a crucial win over T&A San Marino. In the Cup's Final Four, Bergman battled Carlos Richetti evenly with five shutout innings before fading, giving up 3 runs in the 6th and 7th (retiring no one in the 7th before leaving). He was 0-1 with a 3.29 ERA in the 2009 World Port Tournament. He tossed two innings in the finale and surrendered a 2-run homer to Eriel Sánchez.

After going 32-4 from 2006-2008, Bergman started the 2009 season 1-4. He finished better at 8-6, 2.02 with 88 K to 18 BB in 107 IP. He tied Duko Jansen for 4th in the league in wins, was second to Ryan Murphy in innings, tied Kevin Heijstek for 2nd in complete games (3), was 4th in whiffs (behind Murphy, Rob Cordemans and Adam Blackley), tied for first in shutouts (3, even with Murphy and Heijstek), was 5th in ERA (between Markwell and Blackley) and was third in WHIP (after Dushan Ruzic and Murphy). He pitched in relief for the Netherlands in the 2009 Baseball World Cup.

Bergman was 1-0 with a 4.50 ERA in the 2010 Haarlem Baseball Week, beating the NJCAA All-Stars. In the 2010 European Championship, he helped the Netherlands win the Silver Medal, getting the win over Sweden. He also appeared in the 2010 Intercontinental Cup, tossing two stellar outings as the Netherlands again won the Silver (Cuba beat them in the Gold Medal game). He relieved Boyd and got the victories against both Nicaragua (0 R in 3 IP) and South Korea (0 R in 4 2/3 IP). He tied Orlando Yntema, Dalier Hinojosa, Petr Minarik, Marco Grifantini and Daiki Kiyohara for the Cup lead in wins and also tied for the ERA lead.

The Haarlem native went 8-3 with a 2.11 ERA for Kinheim in the 2011 Hoofdklasse, placing him among the league leaders in ERA (6th, between Patrick Beljaards and Kevin Heijstek), opponent average (.213, 4th, after Cordemans, Craig Anderson and Markwell), innings pitched (4, 4th, between Bobby Carrington and Cordemans), strikeouts (101, 2nd, 26 behind Cordemans) and wins (4th). He was again a finalist for Pitcher of the Year but Cordemans was an easy choice with a 0.31 ERA.

In the 2011 Baseball World Cup, Bergman did a superb job as the Netherlands' closer as they won their first Gold Medal ever in a Baseball World Cup. He went 1-0 with 3 saves and a 1.04 ERA. He saved a win over Japan (1 2/3 IP), tossed two perfect innings against Puerto Rico and saved a win over Team USA for Markwell (allowing his only one run on a walk to Andrew Garcia and a single by A.J. Pollock). He then entered a game against Australia which had been postponed in progress due to rain; replacing Markwell when the game resumed a day later, he went 2 1/3 innings for the win. He also tossed one shutout inning against Panama in round one. In the historic Gold Medal game against Cuba, he relieved Juan Carlos Sulbaran in the 9th with one on, one out and a 2-1 lead. He retired José Dariel Abreu, gave up a single to Michel Enríquez then got Héctor Olivera Jr. to end it. He tied Yadier Pedroso and Gabriel Alfaro for the Cup lead in saves but lost the All-Star reliever award for the Cup to Pedroso.

In the 2012 Hoofdklasse season, the right-hander kept on rolling, going 9-3 with a 1.52 ERA. In 100 2/3 innings, he struck out 101 while only issuing 12 walks. He finished among the league leaders in ERA (5th, between Markwell and Tim Roodenburg), innings (2nd to Joey Evans), strikeouts (tied for first with Evans), wins (tied for 4th with Ben Grover and Evans) and starts (1st, 15). He then was lights-out in the 2012 Holland Series as Kinheim beat DOOR Neptunus in a sweep. In game one, he allowed two unearned runs in 6 2/3 IP before giving way to Pim Walsma in a win over Markwell. He returned for game four and struck out 13 and allowed only two runs in eight innings to again beat Markwell. He was named Holland Series MVP.