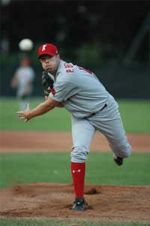 A two-time Olympic performer, Patrick Beljaards was the star of the 2006 Holland Series.

In the 1996 World Junior Championship, Beljaards was a hitter more than a pitcher, leading the Netherlands with a .444 better average and outhitting future major leaguers Michael Cuddyer, Dane Sardinha and Rick Ankiel.

During the 2003 campaign, Patrick had a 1.63 ERA (4th in Hoofdklasse) and led with 115 2/3 IP but did not finish among the win leaders as Kinheim went just 11-15 on the year. Beljaards led the loop with five complete games and was third with 84 strikeouts. In the 2003 European Championship, he was named the All-Star left-handed pitcher after leading in ERA (no earned runs in 15 IP, striking out 15, allowing 8 hits) for the winning Dutch squad. In the 2003 Baseball World Cup, Patrick was 0-1 with a 9.53 ERA. In the 2003 World Port Tournament, he was 2-0 and threw 14 scoreless innings but did not win the World Port Tournament Best Pitcher award. Beljaards allowed 5 runs in 3 innings in a loss to Canada in the 2004 Olympics.

In 2005, he was 7-6 with a 1.89 ERA for Kinheim and was 4th in Hoofdklasse in ERA once more. His 98 strikeouts were second to Satoru Fujii and he tied for sixth with three complete games. Beljaards was named the All-Star left-handed pitcher in the 2005 European Championship; his two wins tied for second place in the event. He had a 0.68 ERA. In the 2005 Baseball World Cup, he was 1-2 for The Netherlands with a 3.63 ERA; the rest of the Dutch stuff was 7-1 as the country made its first top 4 finish ever. It didn't help that he was the starter in one game against Cuba, the top offensive team.

Beljaards had a 12-2, 1.76 record in 2006. He tied David Bergman and Diegomar Markwell for the win lead and was fourth in ERA. He was third in innings pitched (122 2/3 IP) and was 6th with 62 strikeouts while tying for fifth in complete games (2). In game two of the Holland Series, he allowed one run in nine and then followed with a win in game four, though he allowed 5 runs (all unearned) in 7 1/3 innings of work. Overall, he was 3-0 with a 0.74 ERA in the postseason as Kinheim claimed the title.

Patrick was 7-3 with a 2.89 ERA in the 2007 Hoofdklasse Honkbal season. He walked only 17 in 87 1/3 IP. He was 4th in Hoofdklasse in innings and tied Jos de Jong for fifth in wins. In the 2007 Holland Series, Beljaards started game two and had a no-decision, allowing three runs in 7 innings. Kinheim won its second straight crown.

In the 2007 European Cup, Beljaards was 2-0 with a 1.26 ERA and 16 strikeouts in 14 1/3 IP. He started the finale against the Rouen Huskies and got the win; it was the first European Cup title for Kinheim.

Beljaards went 1-0 with a 0.61 ERA as Kinheim repeated in the 2008 European Cup. He beat the Marlins Puerto Cruz in the round-robin. In the finals, he dueled Linc Mikkelsen until being yanked in the 9th; Kinheim went on to win in extra innings against the Montepaschi Grosseto. 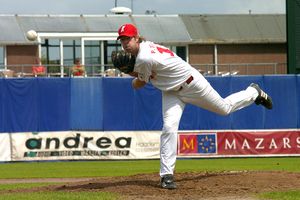 Beljaards pitching in a game in July 2009.

In the 2008 Holland Series, he started game two but allowed 5 runs (3 unearned) in 6 innings in a loss to the L&D Amsterdam Pirates, who upset Kinheim in winning the Series. During the Matino phase of the 2009 European Cup, Patrick again was plagued by bad defense behind him, allowing 6 runs (only 1 earned) in a loss to Fortitudo Bologna. In the Cup's Final Four, Beljaards allowed one run (unearned) in five innings.

He is the brother of Richard Beljaards and uncle of Denny Beljaards.