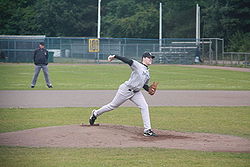 Kevin Heijstek has pitched for the Dutch national team and has been named Hoofdklasse Pitcher of the Year.

He allowed 3 runs in 3 1/3 innings for the Dutch team in the 2004 World Junior Championship. He debuted in Hoofdklasse in 2005. The 17-year-old hurler allowed one run in two innings for DOOR Neptunus that season. He won the Roel de Mon Award in 2004-2005 as the best young pitcher in the Netherlands. In 2006, Heijstek was 5-3 with a 5.67 ERA for Neptunus. He pitched in the 2006 World Junior Championship.

The tall right-hander got a bigger role in 2009 when Leon Boyd signed with the Toronto Blue Jays shortly before the season began. He then joined the Dutch squad for the 2009 World Port Tournament, going 0-1 with 7 runs and 9 hits in 3 2/3 IP. For the 2009 Hoofdklasse season, Heijstek was successful, going 10-3 with a 2.13 ERA. He was 7th in the league in ERA, 4th in WHIP, tied Bergman for second in complete games (3, trailing Ryan Murphy), tying Bergman and Murphy for the shutout lead (3) and tying Murphy and Diegomar Markwell for the win lead. He also won game 3 of the 2009 Holland Series as Neptunus swept the Vaessen Pioniers.

In 2010, he was the weakest link on a superb Neptunus staff as Boyd returned to join Markwell and Australian Dushan Ruzic. Heijstek was 9-1 with a 2.24 ERA. He just missed the top 10 in ERA, tied for 8th in opponent average (.221, even with Markwell) and tied for second in wins (3 shy of Bergman). In the 2010 European Cup, he allowed one run in 8 innings to beat France's Savigny Lions but Neptunus was otherwise 1-3. During the 2010 Holland Series, he tossed 6 1/3 shutout innings in game 3 against the Amsterdam Pirates before Ruzic wrapped up the whitewash; Neptunus won the Series in six.

In the 2010 Haarlem Baseball Week, he held the NJCAA All-Stars to one hit in five shutout innings. During the 2010 European Championship, he made his debut for the Dutch in a major senior tournament. The 22-year-old got one start, holding Belgium to four hits, one walk and no runs in eight innings before Dave Draijer finished up the shutout. Heijstek also appeared in the 2010 Intercontinental Cup as the Netherlands won the Silver Medal. He again got the call against one of their weaker opponents, holding the Thai national team to one hit in five shutout frames, whiffing eight, before Orlando Yntema relieved him.

Heijstek was 7-2 with a 2.38 ERA for Neptunus in the 2011 Hoofdklasse, finishing 7th in ERA (between Bergman and Yntema), 6th in opponent average (.220, between Eddie Aucoin and Derek Tarapacki) and tying Patrick Beljaards and Yntema for fifth in wins. In the 2011 European Cup, he allowed two runs (one earned) in seven innings to beat the Marlins Puerto Cruz. He was 0-1 with a 3.00 ERA in the 2011 World Port Tournament, dropping a decision to Cuba.

Heijstek was on the Dutch squad that surprised people by making the semifinals of the 2013 World Baseball Classic, better than powerhouses like Cuba, Team USA, Venezuela and South Korea. He had a 3.38 ERA in two relief appearances for the Orange, pitching in their two losses to Japan. He allowed 3 runs in 5 innings in the 2013 World Port Tournament and 10 hits and 3 runs in 6 innings in a loss to Tiago Da Silva and T&A San Marino in the 2013 European Cup. In the 2013 Hoofdklasse campaign, the righty was a swingman. He was 6-2 with a 1.03 ERA and led the league in ERA by .08 over Cordemans (who won Pitcher of the Year; Heijstek did not make the finalists). He tied Veltkamp for 4th in opponent average (.199), was 9th in IP (78 1/3, between Yntema and Jos de Jong), 9th in whiffs (55, between Yntema and Kevin Miner) and tied for 9th in wins (with Miner, Ivan Granados and Jurjen van Zijl).

The Dordrecht native allowed one run in six innings in the 2014 Haarlem Baseball Week, beating Japan. In the 2014 European Championship, he allowed only two unearned runs in nine innings as the Netherlands won the Gold Medal. He had a no-decision in a rout of Croatia as he left after two innings to spread out the work, then beat Germany. In the 2014 Hoofdklasse, he moved to Amsterdam and was superb (10-3, 1.33). He was second in ERA (.18 behind Yntema), led in opponent average (.178, .009 ahead of Yntema), led in innings (101 1/3, 15 more than Yntema), was second in strikeouts (77, 6 behind Ricardo Hernández) and led in wins (one more than Hernández). He won Pitcher of the Year honors, beating out fellow finalists Yntema and Arshwin Asjes. He beat his old Neptunus club in the 2014 Holland Series opener (8 1/3 shutout IP to top Markwell) but allowed 9 hits and 3 runs in 6 1/3 IP in a game 3 loss. In game 6, he got the call with a chance to win it all for Amsterdam but surrendered 5 runs (3 earned) in 6 2/3 to lose to Yntema. Amsterdam also dropped game 7.