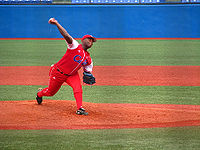 Yadier Pedroso was a member of the Cuban national team several times, including in the Olympics and World Baseball Classic, before he died at age 26 in a car crash. He was the son of José M. Pedroso.

Pedroso was a star in the 2004 World Junior Championship, going 2-0 with a 0.50 ERA to help Cuba win Gold. In the finale, he threw a 1-hit shutout against Japan, beating Yu Darvish. He made the tournament All-Star team and also took home MVP honors. He debuted in Cuban league play for La Habana in 2004-2005 and was 11-4 with a 2.47 ERA as a rookie. In the finals, he went the distance in game six, dropping a 2-1 pitching duel to Ormari Romero of Santiago de Cuba. He was named Serie Nacional Rookie of the Year.

He was Cuba's worst hurler in the 2005 Baseball World Cup, allowing 2 runs in 2 1/3 innings in his senior national team debut.

In the 2009 World Port Tournament, Pedroso allowed one run and two hits in 7 innings, fanning nine as Cuba won the title. He was 0-1 with a 6.23 ERA in the 2009 Baseball World Cup, striking out 15 in 8 2/3 IP; he was clearly Cuba's worst hurler as no one else had an ERA over 2.50 on the second-place team. He struggled against Spain and the US and took the loss to Puerto Rico (giving up a game-losing homer in the 8th to Luis Matos.

Pedroso was 7-3 with a save and a 3.27 ERA in 2009-2010. He went 2-0 with a 0.71 in the 2010 World University Championship, tying Miguel A. González for 6th in ERA and beating South Korea twice. He remained very sharp in the 2010 Pan American Games Qualifying Tournament, getting the save for Yulieski González against Canada and beating Venezuela in relief in the semifinals; Canada lost the finale to the Dominican Republic, having already locked up a spot in the 2011 Pan American Games and 2011 Baseball World Cup. For that tourney, Pedroso allowed no runs in 9 1/3 innings, allowing only three hits (all singles), two walks and one hit batsmen, while fanning nine; only teammate Jonder Martínez finished with a better ERA (no runs in 10 2/3 IP).

In the 2010 Intercontinental Cup, the right-hander saved wins over Taiwan and Japan. In the Gold Medal game, he struggled, relieving Yulieski González with a 4-0 lead over the Netherlands. He walked Eugene Kingsale then gave up hits to Mariekson Gregorius, Sidney de Jong and Curt Smith to make it 4-1 and put the potential tying run aboard. Jonder Martínez relieved and escaped the jam. Pedroso still made the Cup's All-Star team as the top reliever. Yadier had a 7-4, 3.03 record in Cuba in 2010-2011, finishing 5th in the league in ERA.

Pedroso made another All-Star team in the 2011 Baseball World Cup, posting a 1.69 ERA and registering three saves while fanning 17 in 10 2/3 IP. He saved Norberto González's 3-0 win over the Dominican Republic, walking Alexis Gómez only in two shutout innings. He saved Yulieski González's win over South Korea. In the 8-7 win over the USA, he struck out 7 and allowed one run in three innings, fanning A.J. Pollock, Joe Thurston and Matt Clark in order to end it. He tied Gabriel Alfaro and David Bergman for most saves in the Cup. Cuba again wound up with a Silver, losing 2-1 to the Netherlands in the finale (Pedroso did not pitch in that contest). He allowed two hits and two walks in 3 1/3 IP in the 2011 Pan American Games and struck out one, but did not allow a run. He saved Alberto Soto's 5-4 win over Venezuela. In the Bronze Medal game, he tossed 2 1/3 shutout innings to finish Miguel A. González's victory over Mexico.

After the La Habana province was split in two, Pedroso was assigned to the Artemisa team. He did very well for a 36-60 team, going 10-6 with a save, 2.64 ERA and .210 opponent average, fanning 128 in 129 1/3 innings. He tied Odrisamer Despaigne for the 2011-2012 Serie Nacional lead in strikeouts and was 7th in ERA, between Leandro Martínez and Alain Sánchez. In the Cuban All-Star Game for 2012, he took the loss for the Occidentales, losing a 8-7 decision to Pablo Fernández. In the 2012 Haarlem Baseball Week, Yadier had a 3.24 ERA and no decisions in three appearances.

Pedroso began 2012-2013 slowly (0-2, 5.64). He still made Cuba's squad for the 2013 World Baseball Classic. He allowed four hits in 1 1/3 IP and was charged with one run, pitching against both China and the Netherlands. In Cuba's first loss to the Netherlands, he entered with a 2-1 deficit, two on and two out in the 6th but served up a 3-run dinger to Jonathan Schoop. Shortly after Cuba was eliminated from the 2013 World Baseball Classic, Pedroso died in an automobile accident on the highway outside Havana. The car he was in collided with a freight truck.