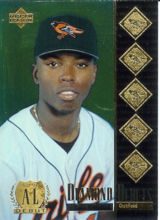 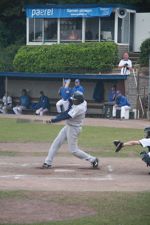 Eugène Kingsale was a member of the Dutch national team from 2003-2009. The first Aruban major leaguer, Kingsale played parts of six seasons in the majors. He then went on to the Netherlands to continue his career. He is one of the few major league players who is also a knight.

Kingsale broke into Organized Baseball as a 18-year-old with the GCL Orioles in 1994. He hit .310/.381/.357 and stole 15 bases in 23 tries, leading the team in steals, hits (52), runs (26), triples (3) and average. League managers rated him as the #9 prospect in the league, between Hiram Bocachica and Ramon Castro. He was not the highest-rated Dutch citizen as Andruw Jones was ranked third.

In 1995, Eugène hit .316/~.409/.404 with 45 runs and 20 steals (in 28 tries) in 47 games. He was 9th in the Appalachian League in average and helped the Bluefield Orioles to the best regular-season record in the league. One negative was that he led the Appy League's outfielders with 11 errors. Baseball America rated him as the #6 Orioles prospect.

Kingsale hit .271/~.346/.355 with 23 steals in 27 tries in 1996 and led the Frederick Keys in stolen bases. Baseball America rated him as the fastest baserunner in the Carolina League. A September call-up, he was the first player from Aruba in the major leagues - he made his debut five days earlier than fellow Aruban Calvin Maduro. In his major league debut on September 3rd, he replaced B.J. Surhoff as a defensive substitute and caught one fly from J.T. Snow. He did not bat with the Orioles, playing twice as a defensive sub and once as a pinch-runner. Baseball America rated him as the #3 prospect in the Orioles chain, following Nerio Rodriguez and fellow Aruban Sidney Ponson. He was the youngest player in the American League that year.

He joined the Dutch national team for the first time that year. In the 2003 Baseball World Cup, he shined, hitting .381/.480/.810 with 7 runs in 6 games. He was only third on the team in OPS as Sharnol Adriana and Ivanon Coffie did even better.

He was knighted to the Order of Oranje-Nassau in 2003 by Aruban Governor-General Olindo Koolman. He was also knighted by Queen Beatrix of The Netherlands in 2004 along with fellow major league players Calvin Maduro and Sidney Ponson in a ceremony in Oranjestad, Aruba.

He played for the Netherlands in the 2006 World Baseball Classic. He went 0 for 5 in the opener against Puerto Rico, stranding five as the leadoff man. He did better in game two against the Cuban national team, going 1 for 3 with a walk and a run. He scored the Netherlands' last run in the 11-2 loss when he singled off of Adiel Palma and came around on a hit by Randall Simon.

Kingsale also appeared for the Dutch national team in the 2006 Intercontinental Cup, hitting .289/.386/.342 with 8 runs and 7 RBI in 9 games. In the Gold Medal game, he hit a 2nd-inning double off of Norge Vera, scoring Danny Rombley and Mike Duursma for a 2-0 Netherlands lead. They went on to lose, 6-3. Kingsale tied Raily Legito for the team lead in runs scored. He played for the Netherlands in the 2006 Haarlem Baseball Week.

Kingsale became the first Hoofdklasse player to switch teams between 2007 and 2008, as his Almere squad was relegated out of Hoofdklasse. He joined Neptunus in September of 2007.

Kingsale was considered a leader on the Dutch national team, so much so that he was brought along with the team to the 2007 European Championships in Barcelona even though he wasn't able to play due to injury, only for moral support and team leadership. The Dutch went undefeated and gained a ticket to the 2008 Olympics in Beijing.

In the 2008 Hoofdklasse, the Aruban batted .326/.489/.522 for Neptunus with 36 runs in 38 games. He had a 1088 OPS in the playoffs but Neptunus was eliminated. He was 10th in the league in average, second in slugging (behind Sidney de Jong), tied de Jong for 2nd in OBP (behind Raily Legito), tied Bryan Engelhardt and Fausto Alvarez for third in home runs (5), tied Mark Duursma and Benjamin Dille for second in runs (36, 2 behind de Jong), tied for second in triples (3) and was third in walks (33, trailing Legito and de Jong).

Kingsale was the worst Dutch hitter in the 2008 Olympics, going 1 for 17 without a walk or extra-base hit despite having the most MLB experience on the team. He had as many errors as walks as he dropped a fly in a game against Taiwan. The Netherlands had its worst Olympic performance, going 1-7.

Kingsale bounced back in the 2009 World Baseball Classic, hitting .292/.346/.292 as the third-best Dutch hitter after Sidney de Jong and Bryan Engelhardt. He alternated between right field (with Dirk van 't Klooster) and center field (with Greg Halman). Gene started the Dutch offensive in their 3-2 upset of the Dominican national team with a bunt single off Edinson Volquez; he came around on a wild pitch. In the second game against the Dominican Republic, Kingsale played both Goat and Hero. In the top of the 11th of a scoreless game, he dropped a fly from Jose Reyes for a run-scoring error. In the bottom of the inning, he singled off Carlos Marmol to score de Jong with the tying run. When Marmol made an error on a pickoff attempt, Kingsale raced to third. He then scored on a Willy Aybar miscue.