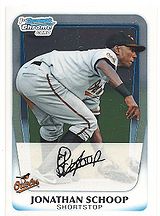 Jonathan Schoop began his professional career in 2009, the same year his brother Sharlon Schoop played in the World Baseball Classic.

In 2011, he was used as a utility infielder by Frederick (.271/.329/.375 in 77 G) and the Delmarva Shorebirds (.316/.376/.514 in 51 G), with 13 home runs and 82 runs between the two clubs. Baseball America rated him as the #9 South Atlantic League prospect (between Brandon Jacobs and fellow Dutch citizen Xander Bogaerts) and the #6 Carolina League prospect (behind Manny Machado, Drew Pomeranz, Mike Olt, fellow Dutch citizen Andrelton Simmons and Robbie Erlin). In the 2011 Futures Game, he replaced Jose Altuve as the second base for the World team in the 6th inning; he formed a double play tandem with former Little League World Series teammate Jurickson Profar. In his lone plate appearance in the contest, he singled off Kyle Gibson in the 7th but was picked off.

He then made the Dutch national team roster for the 2011 Baseball World Cup; though still a teenager, he was not even the youngest infielder on the roster, as Bogaerts made it at age 18. One of his teammates on the club was his brother Sharlon. He got into regular action after starting third baseman Vince Rooi was injured early in the Cup. Jonathan wound up hitting 6th or 7th after his brother Sharlon. Schoop struggled offensively on the tourney, hitting .184/.225/.263, which was actually better than Sharlon posted. Jonathan did field well, with 14 putouts, 11 assists and no errors. He also had some clutch plays. In a 7-5 upset of Team USA (the defending champs), Jonathan hit a three-run triple off Matt Shoemaker. Against Australia, he threw out a runner at home in a 2-1 win. In the Gold Medal game against Cuba, he came to bat in the 4th with one out and a 1-1 tie facing Freddy Asiel Alvarez. Schoop singled in Curt Smith with the last run of the Gold Medal game, helping the Netherlands win Gold for the first time ever at a Baseball World Cup.

Schoop's prospect status took a hit in 2012 as he hit .245/.324/.386 with 14 home runs for the Bowie Baysox. He also was now primarily a second baseman rather than a shortstop. Baseball America ranked him as the Eastern League's #14 prospect, between Mike Kickham and Rob Brantly. He was the starter at second for the Netherlands in the 2013 World Baseball Classic and hit .214/.313/.464 with 6 RBI in 8 games. His 2-run homer off Dushan Ruzic capped the Orange's 4-1 win over Australia. Against Cuba, he again starred, getting 3 hits and 4 RBI in the first match-up, each hit a big one. His single knocked out Cuban starter Ismel Jiménez, his 3-run homer off Yadier Pedroso built a one-run lead into a four-run cushion and his RBI double off Yander Guevara scored Simmons with the game's last run of a 6-2 victory. In the Netherlands' semifinal game, he hit 7th and went 0 for 4, striking out against Fernando Rodney to end the team's historic run to the final round. He tied Simmons for the team lead in home runs (2) and RBI in the tournament, beating out noted sluggers like Andruw Jones and Wladimir Balentien. Overall, he tied for 9th in the Classic in RBI and tied Shinnosuke Abe, Robinson Cano, Chris Colabello, Hanley Ramirez, Carlos Santana, Simmons and Yasmany Tomas for third in home runs (one behind José Dariel Abreu and Alfredo Despaigne. On the downside, his 8 whiffs tied Edwin Encarnacion and Alejandro De Aza for the tournament lead.

Schoop had a great major league debut for the Orioles on September 25, 2013, making a start at second base one day after the Birds were eliminated from contention for a wild card spot. Hitting 8th against the Toronto Blue Jays, he singled off Esmil Rogers in the 3rd inning in his first career at-bat, then came home to score on Ryan Flaherty's homer; he grounded into an inning-ending double play in the 4th but led off the 6th with a homer off Kyle Drabek, then walked against Ricky Romero to lead off the 8th, scoring his third run on Flaherty's second long ball of the contest. Thus, he finished his first day in the bigs 2 for 3 with 3 runs scored and an RBI as the Orioles won, 9-5. He went 4 for 14 in 5 games. In 2014, he played 137 games in his rookie season, but hit only .209 with 16 homers and 45 RBIs. His biggest Achilles' heel was his plate discipline as he walked only 13 times against 122 strikeouts. The Orioles had a great season, winning a division title, and he went 3 for 10 in the Orioles' sweep of the Detroit Tigers in the Division Series. However, the Birds ran into a very hot Kansas City Royals team in the ALCS, being swept as Jonathan went 1 for 11.

In 2015, Schoop was limited to 86 games but made some significance improvement, hitting .279 with 15 homers and 39 RBIs. His OPS+ was the best indicator of his progress, having gone from a very poor 65 as a rookie to a very good 111. He still had trouble controlling the strike zone, though, with 79 Ks and only 9 walks. In 2016, he played all 162 games for the Orioles and set personal bests with 38 doubles and 25 homers, to go along with a .267 batting average, 82 runs and as many RBI. He still had trouble getting on base regularly, with only 21 walks, for an OBP of .298. In the Wild Card Game which the Orioles lost to the Toronto Blue Jays in extra innings, he went 0 for 4.

Schoop played for the Dutch national team in the 2017 World Baseball Classic, his second appearance in the tournament. In 2017, he made the All-Star team for the first time. That season, he set a new record for RBIs by an Orioles second baseman. The previous mark had been 94, by Hall of Famer Roberto Alomar in 1996. He finished the year with 105, to go along with a .293 average, 35 doubles, 32 homers and 92 runs scored in 160 games in what was his best season up to that point. However, he started 2018 slowly and after 85 games, he was hitting .244 with 17 homers and 40 RBIs when he was traded to the Milwaukee Brewers on July 31st in return for Jonathan Villar and two prospects, Jean Carmona and Luis Ortiz. He was just coming off a great month, having hit .360 with 9 homers in July, but the Orioles were conducting a veritable fire sale at the trade deadline after an awful first four months. Jonathan failed to shine with the Brewers, however, hitting just .202 in 46 games over the rest of the season. He was no longer a starter when the postseason started, with the Brewers having moved Travis Shaw over from third to second, taking a defensive hit to improve the offense. He was hitless in the two series the Brewers played, making just one unconvincing start in their loss to the Los Angeles Dodgers in the NLCS. Following the season, the Brewers failed to offer him a new contract, making him a free agent.

On December 6, 2018, he signed a one-year contract with the Minnesota Twins worth $7.5 million. Like the Orioles, the Twins had also traded their starting second baseman, Brian Dozier, at the trading deadline the previous year. He was part of a record-breaking offensive collection with the Twins in 2019, as the team bounced back from its disappointing previous season to threaten the all-time record for home runs by a team. Schoop did his part by reaching the 20-homer mark for the fourth time on August 28th as part of a two-homer game in an 8-2 win over the Chicago White Sox. He became the 7th Twins player to reach the mark that season, tying the major league mark shared by seven other teams. He finished the season at .256 in 121 games, with 23 homers and 59 RBIs, but lost playing time down the stretch with the arrival of rookie Luis Arraez, who hit .334 and was a nice contrast on a team full of low-average power hitters. Arraez was the starter at second base in the postseason, when the Twins made a quick exit when swept in three games by the New York Yankees in the Division Series. Schoop had only 2 at-bats in the series and it was no surprise that he was granted free agency after the season. On December 21st, he signed a one-year deal with the Detroit Tigers for $6.1 million, on the same day as Twins teammate 1B C.J. Cron, who had put up very similar numbers also in his single season in Minnesota, and who signed for exactly the same amount.

Schoop turned out to be one of the better players on the Tigers in 2020 as one of a small number of productive veterans on a rebuilding squad. In 44 games in the pandemic-shortened season, he hit .278 with 8 homers and 23 RBIs, also scoring 26 runs, for an OPS+ of 115. It was supposed to be a one-year thing, but when the free agent market largely cratered after the season, given the economic uncertainties resulting from the pandemic, Schoop was unable to turn his productive season into a more stable deal and on February 5, 2021 he decided to return to the Tigers, and to do so took a pay cut, signing for $4.5 million. The Tigers were still looking to go with youth, but could not pass up such a bargain, knowing that it was useful to also have a few productive players with some years of experience to help nurture along the kids.