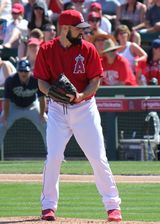 Matt Shoemaker was undrafted out of college, but was in AAA just two years after graduating.

Shoemaker then was picked to play for Team USA. He was 1-1 with a 7.88 ERA in the 2011 Baseball World Cup. In his first outing, he was crushed in a loss to the Dutch national team (the eventual champs). In the first, he walked Kalian Sams, allowed a Sidney de Jong single then served up a 3-run homer to Curt Smith. In the 3rd, he walked de Jong, allowed a Bryan Engelhardt single, walked Sharlon Schoop, gave up a 3-run triple to Jonathan Schoop then let in another run on an error by SS Andrew Garcia. Justin Cassel relieved and the bullpen did well, but the US lost 7-5. He was much better in his second outing, beating South Korea with five shutout innings on 2 hits, one walk and four whiffs. Royce Ring relieved. The US shared the Bronze Medal with Team Canada when the Bronze Medal game was rained out. In the 2011 Pan American Games, he was used in relief by manager Ernie Young, due to the shorter schedule. He made one appearance, allowing a hit and a walk in a shutout inning versus Panama while fanning two; he teamed with starter Drew Smyly on a combined shutout.

A workhorse again in 2013, he was 11-13 with a 4.64 ERA. He allowed 27 homers in 184 1/3 IP but had 160 strikeouts to 29 walks. He was among the 2013 Pacific Coast League leaders in numerous departments again: wins (4th behind Bruce Billings, Johnny Hellweg and Andrew Werner), losses (tied for 6th with Brian Flynn and James Paxton), innings (1st by 19 1/3 over Werner), hits allowed (1st, 10 ahead of Werner), runs (3rd behind Werner and Chris Schwinden), earned runs (95, 2nd, 11 behind Werner), home runs (2nd to Enright) and strikeouts (1st, 25 ahead of Billings). In the Angels chain, the right-hander was tied for third in wins (with Dan Reynolds and Jarrett Grube), tied for first in losses (with Orangel Arenas), first in innings (by 28 over Mark Sappington), first in hits (by 36), first in runs (4 ahead of Enright), first in earned runs (3 more than Enright), second to Enright in homers and first in whiffs (7 more than Grube). Called up to the Angels in September, Shoemaker had an excellent start in his lone outing, a start against the Seattle Mariners on September 20th. He struck out Dustin Ackley, Franklin Gutierrez and Kendrys Morales in the 1st, with a Michael Saunders walk the lone negative. He finished with 2 hits, 2 walks and 5 whiffs in 5 shutout innings before giving way to Buddy Boshers. He had a no-decision in a 3-2 extra-inning win for the Angels. It was his only major league appearance of the year.

Matt got credit for a historic win for the Angels on July 7, 2014. Taking over in the 3rd inning for an ailing Jered Weaver in a game against the Toronto Blue Jays, he pitched effectively for 3 2/3 innings to be given credit for his team's 7-2 win. The win allowed the Angels to even their all-time record at 4,272 wins and 4,272 losses, making it the first time they had been at .500 as a franchise since starting out their inaugural season in 1961 at 1-1. Shoemaker was having a solid rookie season, as the win improved his record to 7-2 after 14 games. He continued to pitch well as the Angels surged to the top of the standing in the AL West, being named both the American League Rookie of the Month and Pitcher of the Month in August when he went 6-1, 1.31, one of the wins coming in relief at the end of a 19-inning game against the Boston Red Sox on August 9th. He recorded his 16th win of the year on September 15th, 8-1 over the Seattle Mariners, in a game that clinched a postseason berth for the Angels. However, he had to leave the game in the 8th with an apparent injury. The injury was a mild strain to his left oblique muscle, forcing him to miss a start, not necessarily a bad thing considering how much work he had done on the mound to get the Angels into the postseason. He ended the year at 16-4, 3.04 in 27 games, including 20 starts. He led the AL in winning percentage. He started Game 2 of the ALDS against the Kansas City Royals on October 3rd with the Angels already down two games to none. He did well, giving up only one unearned run in six innings but was not involved in the decision as Los Angeles lost, 4-1, and were eliminated.

2015 did not go as well either for Matt or for the Angels. He made 24 starts in 25 appearances, logging 135 1/3 innings after pitching 136 as a rookie, and 7-10, 4.46. In 2016, he was headed for his first almost full season in the majors, but in his 27th start against the Seattle Mariners on September 4th, he was struck in the right side of the head by a line drive off the bat of Kyle Seager in the 2nd inning and suffered a skull fracture. He was 9-13, 3.88, had pitched 160 innings, and had won his last three decisions before the injury. On September 5th, he underwent surgery to relieve bleeding in his brain and was expected to make a full recovery, although he was clearly done for the season. He had started the year slowly, allowing 28 runs in his first 29 1/3 innings, before being demoted to AAA for one game and finding his groove when he began to use his splitter as his main pitch. In his final 130 1/3 innings, he had struck out 121 and walked only 17. In 2017, he made 14 starts and went 6-3, 4.52. He had another shortened season in 2018, when he went 202, 4.94 in 7 starts. Both of those seasons were shortened by an injury to his right forearm.

On December 28, 2018, he signed a one-year contract as a free agent with the Toronto Blue Jays worth $3.5 million. His first start for the team was a great one, on March 29, 2019 against the Detroit Tigers, as he pitched seven scoreless innings to send the Jays on their way to a 6-0 win. His second start on April 3rd was just as good as he spun another 7 scoreless innings, striking out 8 while walking just 1, in defeating the Baltimore Orioles, 5-3. However, in his 5th start, against the Oakland A's on April 20th, he had to leave the game in the 4th inning after injuring his knee in a rundown play. The news the next day was that he had torn his ACL and that he would miss the remainder of the season. He was 3-0, 1.57 and had been the team's best pitcher during the first month of the year. When he next pitched over a year later, on July 25, 2020, he seemed not to have lost a beat, as he tossed six solid innings against the Tampa Bay Rays, allowing just 1 run, in a no-decision. He ended up making 6 starts for the Blue Jays, pitching 28 2/3 innings with a record of 0-1, 4.71. The Jays surprisingly made it into the expanded postseason that year and Matt was chosen to start Game 1 of the Wild Card Series against the Rays on September 29th ahead of ace Hyun-Jin Ryu. It was not a straightforward start, however, as manager Charlie Montoyo had come up with a plan to have Matt and Robbie Ray, two pitchers with very contrasting styles, split the job, with Shoemaker handling the first three innings and Ray the next three. The plan worked as Matt gave up no runs on two hits in his part of the contract, and Ray just one run in his, giving the team a combined quality start, but they still trailed, 1-0, at the end of the six innings and ended up losing the game, 3-1, with Ray being charged with the loss.

Shoemaker became a free agent after the 2020 season and the Jays did not make a strong effort to re-sign him. It took a while for him to find a team, but on February 14, 2021, he agreed on a one-year deal with the Minnesota Twins.