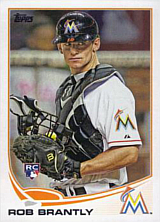 Rob Brantly made his major league debut in 2012.

Brantly was chosen by the Washington Nationals in the 46th round of the 2008 amateur draft out of high school, but did not sign. He hit .316/.344/.454 as a college freshman; that summer, he batted .346 to lead the Northwoods League in average. Baseball America named him the top prospect in the league. As a sophomore at UC-Riverside, he improved to .373/.440/.569 with 50 runs scored in 54 games, winning All-Big West Conference honors. The Detroit Tigers chose him in the third round of the 2010 amateur draft. He was the 100th overall pick and the 4th for Detroit, after Nick Castellanos, Chance Ruffin and Drew Smyly. He was signed by scout Steve Pack for a $330,000 bonus. He hit .255/.352/.335 in his pro debut with the West Michigan Whitecaps then was 5 for 13 in the playoffs. In 2011, Brantly split time between West Michigan (.303/.366/.440 in 75 games) and the Lakeland Flying Tigers (.219/.239/.322 in 39 games). He was named the Midwest League's All-Star catcher, then hit .388 for Salt River in the Arizona Fall League. Baseball America listed him Detroit's 7th-best prospect entering 2012. Rob opened the year with the Erie SeaWolves and was hitting .311/.359/.461 after 46 games. He was promoted to AAA, with future All-Star James McCann taking his place in Erie in a promotion from Lakeland. Brantly batted .280/.330/.312 in 26 games for the Toledo Mud Hens. When Travis D'Arnaud went down with injury, Brantly replaced him on the US team for the 2012 Futures Game. Backing up Tommy Joseph at catcher, Brantly entered in the 5th with the US ahead, 6-4, against the World in an eventual 17-5 win. He came to bat twice in a 9-run 6th, doubling off Ariel Pena to score Castellanos with the inning's first run, then came home on a Manny Machado double. His next time up, he grounded out against Julio Rodriguez. He also flew out against Kyle Lotzkar to end the 7th.

On July 23, 2012, Rob was one of three prospects sent by the Tigers to the Miami Marlins for pitcher Anibal Sanchez and infielder Omar Infante. He had fallen to .254 in 36 games for Toledo, but less than a month later, was called up to make his major league debut with the Marlins. He played 31 games in Miami, hitting .290/.372/.460. He was slated to be the Marlins' backup catcher in 2013, following the acquisition of Jeff Mathis in the offseason, but plans changed when Mathis suffered a broken collarbone in spring training. Even though the Marlins signed veteran Miguel Olivo at the end of spring, Rob got the bulk of playing time in the early going, relegating Olivo to a backup role; Mathis returned in mid-May but did not hit, leaving Brantly as the first-stringer. Olivo eventually left the team in frustration a month later and was placed on the restricted list, confirming that Rob had manager Mike Redmond's full confidence, even if he was hitting only .236 with no homers and 12 RBI in 41 games. In 67 games that year, he batted but .211/.263/.265 with 10 extra base hits in 223 at bats.

Rob began 2014 in Triple A, ultimately spending the entire year with New Orleans. At season's end, he was picked up on waivers by the Chicago White Sox. His next two big league stints came in 14-game bursts with the Pale Hose in each of 2015 and 2017 respectively, with stints in the Seattle Mariners and Cincinnati Reds organizations in between. With time in the Atlanta Braves, Cleveland Indians and Philadelphia Phillies organizations over the next two seasons, Rob came back up for a fruitless at bat with the Phils on July 12, 2019 against the Washington Nationals. Facing Sean Doolittle, he struck out to end a 4-0 loss at Citizens Bank Park.