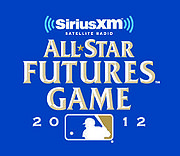 The 2012 Futures Game was played July 8 at Kauffman Stadium, the site of the 2012 All-Star Game. The United States team won the game handily, by a score of 17-5. The U.S.'s 9 runs in the 6th inning were the most scored in any single inning in the game's history. Nick Castellanos hit a three-run homer in that inning while going 3 for 4 to earn the Larry Doby Award as the game's Most Valuable Player.

The World Team had gotten off to an early 4-0 lead, thanks to largely a solo homer by Jurickson Profar off Jake Odorizzi in the 1st, and Jae-Hoon Ha's two-run shot off Gerrit Cole in the 2nd. The U.S. began to turn the tide when Anthony Gose ended the 3rd inning by making a tremendous catch of Oscar Taveras' line drive against Danny Hultzen, averting a big inning. The U.S. then managed to tie the game with four runs in the bottom of the inning when Billy Hamilton tripled in two runs, then scored when Kolten Wong's drive became a three-base error. They took a 6-4 lead in the 4th, on three walks and two-run double by Tommy Joseph and never looked back after that. The damage in the 6th inning took place against Ariel Pena, who let the first five batters he faced reach base, followed by a sacrifice fly by Wil Myers and three more base hits; Julio Rodriguez replaced Pena, but was greeted by Castellanos' homer on a full count.

Dylan Bundy got credit for the win while Felipe Rivero was the losing pitcher.

George Brett was the manager of the U.S. team and Bernie Williams managed the World team.