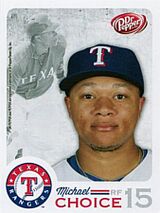 Choice hit .443 as a high school junior and .506 as a senior. As a freshman at the University of Texas-Arlington, Michael hit .376/.440/.558 for the best average by a freshman in school history. He was third in the Southland Conference in average, earning SLC Freshman of the Year honors while being named a second-team Freshman All-American by Collegiate Baseball. In his sophomore season, he hit .413/.492/.644, becoming the sixth player in UTA history to hit for the cycle. He was second in the SLC in OBP, 4th in average, 5th in runs scored (64), 5th in hits (93) and 8th in slugging while making first-team All-Conference. He finished the season with a .396 career average, best in school history to that point. That summer, he became the first UTA player to appear on Team USA's college edition, hitting .350/.453/.550. Choice batted .383/.568/.704 as a junior with 76 walks and 16 home runs in 60 games, reaching base every single game. He reached base in 157 of 166 games during his collegiate career. He led NCAA Division I in walks and walks per game and was second in OBP while leading the SLC in average, walks and OBP, finishing second in runs scored and slugging, third in total bases and fourth in homers. He set the SLC record for walks and set a school record for OBP (breaking Ryan Roberts' mark). Unsurprisingly, he was named the SLC's Player of the Year. Overall, Choice had a batting line of .392/.505/.636 in college with 170 runs scored and 162 RBI in 166 games, 25 steals in 32 tries and 34 homers. He set UTA's career record in homers and finished second in school history in average, RBI and total bases.

Choice joined Ben Sheets as the highest-drafted SLC Player ever when the Oakland Athletics picked him 10th overall in the 2010 amateur draft. He was signed by scout Armann Brown for $2 million and made his pro debut that summer. Assigned to the AZL Athletics, he went 0 for 7 with 2 walks then was promoted to the Vancouver Canadians, where he reached base 21 times in his first 10 games. In 2011, he was the starting center fielder for the Stockton Ports of the California League, hitting .285 with 28 doubles and 30 homers in 118 games. Promoted to the Midland RockHounds of the AA Texas League in 2012, he hit .287 with 15 doubles and 10 homers in 91 games, missing some time because of an injury. He continued his steady progression in 2013, spending the year with the Sacramento RiverCats of the Pacific Coast League; he hit a solid .302/.390/.445 in 132 games, with 29 doubles, 14 homers and 89 RBI.

Choice reached the major leagues with the A's as a September call up in 2013, going 5-for-18 in 9 games. On December 3rd, he was traded to his hometown team, the Texas Rangers, along with minor leaguer Chris Bostick in return for two established big leaguers, outfielder Craig Gentry and pitcher Josh Lindblom. In 2014, he became the first man in Rangers history to hit his first home run in a pinch hitting appearance, taking Kevin Chapman of the Houston Astros deep on April 12th. The season, his longest look in the bigs, was a real struggle, with time back in Triple A scattered between his 86 big league games. Michael hit only .182 in 253 at bats with 9 home runs and 36 RBI. He struggled the ensuing spring too, making only one appearance in June of 2015, before being dealt to the Cleveland Indians organization in August. He ventured to the KBO for a two-season run with the Nexen Heroes beginning in 2017, batting a robust .274/.353/.524 with 34 home runs in 142 games. After time in the Mexican League, he signed a minor league deal with the Colorado Rockies for 2020.