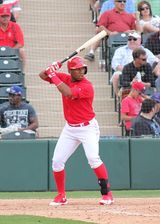 Alfredo Marte made his major league debut in 2013.

Marte's performance was definitely looking enhanced over prior levels in early 2012, as he was batting .295/.368/.589 with 19 doubles, 15 home runs and 50 RBI after 66 games for Mobile after never hitting double-digit homers in a full season prior. He was third in the Southern League in dingers (between Matt Davidson and Joseph Dunigan), first in slugging, fourth in RBI and tied for 8th in doubles at that point. He was picked to represent the World team in the 2012 Futures Game. Hitting cleanup and playing left field, he had a poor day in a 17-5 loss to the USA. He struck out against Jake Odorizzi in the 1st and against Danny Hultzen in the 3rd, then flew out against Tyler Skaggs in the 5th. He was replaced in the field by Rymer Liriano. He finished the year at .294/.363/.523 in 113 games, with 25 doubles, 20 homers and 75 walks. He was just 5 for 30 with one RBI in eight playoff games but his team still won it all. He joined Marc Krauss, Josh Fellhauer and Todd Cunningham as the SL All-Star outfielders. For the season, he was second in the league in slugging (between Hunter Morris and Krauss), third in OPS (after Krauss and Morris), fifth in average (between Morris and Scooter Gennett), fifth in RBI (between Davidson and Dunigan), fifth in total bases (208, between Dunigan and Logan Watkins) and sixth in home runs. He tied Bobby Borchering for fourth in the Arizona chain in homers.

In spite of his breakout season in AA, Marte was not expected to start the 2013 season with the Diamondbacks; however, an injury to projected starter Adam Eaton in spring training changed the plans. Marte opened the season with the team and made his major league debut in the team's second game against the St. Louis Cardinals on April 2nd, batting 6th and playing LF. He flew out against Jaime Garcia in his first MLB at-bat and went 0 for 3 with a walk and a pair of strikeouts in a 6-1 loss.