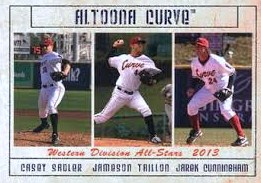 Jameson Taillon was the #2 pick of the 2010 amateur draft.

Taillon was 2-0 with a 0.00 ERA in the 2009 Junior Pan Am Championship to help Team USA win a Gold Medal. He struck out 28 in 13 2/3 innings, walking 3 and allowing 7 hits. He also starred in the Aflac All-American Game. His repertoire contains a fastball (peak time 99 mph), slider and curveball.

Taillon committed to Rice University prior to the 2010 amateur draft but was considered signable and the top high school pitching prospect available. He was the second pick, taken by the Pittsburgh Pirates after Bryce Harper went #1; there was much discussion beforehand about whether the Bucs would take Taillon or Manny Machado.

Taillon made his minor league debut on April 27, 2011, starting for the West Virginia Power against the Hagerstown Suns in the South Atlantic League. He gave up one run in two innings, but the game was then suspended after a rain delay. He hit 100 mph on the radar gun on his fourth pitch of the first inning. One of the batters he faced was Bryce Harper, the only man picked ahead of him in the 2010 draft; Harper drew a walk in his only plate appearance against Taillon. Taillon went 2-3, 3.98 in 23 starts for West Virginia, pitching only 92 2/3 innings, while striking out 97 batters. He was working on a strict pitch count limit all season. In 2012, he made 23 starts for the Bradenton Marauders of the Florida State League, going 6-8, 3.82. He then finished the season by starting three games in AA with the Altoona Curve and winning all of them. As a result, he finished the year at 9-8, 3.55, pitching 142 innings during which he gave up 120 hits, walked 38 and struck out 116.

Taillon's parents are Canadians who both graduated from the University of Toronto; his last name is a typical French-Canadian one. He however was born in Florida and attended high school in Texas. He did pitch for Canada in the 2013 World Baseball Classic, starting the decisive game against Team USA on March 10th, during which he gave up 2 runs - only one of them earned - in four innings of work. He started the 2013 season back with Altoona, where he went 4-7, 3.67 as a starter; he was promoted to the AAA Indianapolis Indians on August 5th and went 1-3, 3.89 the rest of the way. While his won-loss record of 5-10 was unimpressive, his 3.73 ERA in 147 1/3 inning was quite solid, as were the 143 strikeouts he picked up along the way.

The Pirates were looking at promoting Taillon to the big league rotation at some point during 2014, just as they had successfully done with another top pitching prospect, Gerrit Cole, the year before, but got some bad news as spring training broke. He complained of discomfort in his elbow, but initial tests showed that the ligament was partly intact; after further tests, it was decided to have him undergo Tommy John surgery, wiping out his season. He missed all of 2014 and 2015, the second season being lost to a sports hernia operation, and returned to pitch for the AAA Indianapolis Indians at the start of the 2016 season. He was an excellent 4-2, 2.10 in 10 starts when he got the call to the Show in early June. In his debut on June 8th, he faced the New York Mets and allowed 3 runs in 6 innings and was not involved in the decision. On June 14th, however, he was outstanding as he gave up only 2 hits over 8 innings in another start against the Mets; he walked 1 and struck out 5 and was credited with a 4-0 win, the first of his big league career. He went 5-4, 3.38 in 18 starts for the Bucs, with 85 strikeouts against only 17 walks in 104 innings. He was approached by the Canadian national team to join them again for the 2017 World Baseball Classic but turned down the offer, preferring to concentrate on his work securing a permanent position on the Pirates' pitching staff.

In 2017, Jameson began the season in the starting rotation, making his first appearance at Fenway Park on April 5th against the Boston Red Sox and prize off-season acquisition Chris Sale. He matched Sale blow for blow as both pitched seven scoreless innings, with Taillon being just slightly less dominant that his veteran opponent. the game was eventually decided in favor of the Red Sox in 12 innings. He was 2-1, 3.31 after 6 starts when he hit another road bump on May 8th, requiring emergency surgery for testicular cancer. The condition was diagnosed after he complained of discomfort in the groin area. He returned to the mound on June 12th with a strong performance, pitching 5 scoreless innings in defeating the Colorado Rockies, 7-2. he ended up going 8-7, 4.44 in 25 starts, logging 133 2/3 innings and striking out 125 opponents. After the trade of ace Gerrit Cole in the off-season, he had to take over the mantle for himself, and he quickly showed that he was up to the task, winning his first two starts as the Pirates began the season very strong. On April 8th he pitched the first complete game and shutout of his career in hurling a one-hitter against the Cincinnati Reds. Only a single by his opponent on the mound, Tyler Mahle, spoiled his bid for a no-hitter as he ended up a 5-0 winner. On August 7th, he did something extremely rare: pitch a complete game on the road at Coors Field when the Pirates defeated the Colorado Rockies, 10-2. He was the first opposition pitcher to toss a nine-inning complete game there since Clayton Kershaw had done so in 2013, and was also the first National League pitcher to have two complete games that season, a sign of how rare the feat had become. He finished the year at 14-10, 3.20, in 32 starts, logging 191 innings and striking out 179 opponents.

He made just 7 starts in 2019, however, before being sidelined with an elbow injury. He went 2-3, 4.10, pitching 37 1/3 innings. On August 14th, the Pirates announced that he would need to undergo Tommy John surgery for the second time, meaning he would miss all of the 2020 season as well. Following that season, on January 24, 2021, the Pirates traded him to the New York Yankees in return for four prospects: Miguel Yajure, Roansy Contreras, Canaan Smith and Maikol Escotto. The trade reunited him with former Pirates teammate Gerrit Cole, now the Yankees' ace. He made his return to the mound on April 7th, pitching 4 2/3 innings against the Baltimore Orioles. He recorded his first win in two years on May 1st, when he gave up 1 run in 5 innings and struck out 8 batters in a 6-4 win over the Detroit Tigers. He pitched better as the season advanced and in July, he was named the American League Pitcher of the Month when he had a 1.16 ERA in 5 starts covering 31 innings. Cole had won the honor in April.

In addition to Jameson's parents being doctors - his father is a pulmonologist in Fort Myers, FL - his older brother Jordan followed in his father's footsteps, also working as a physician in the Fort Myers area where he was a frontline worker during the COVID-19 pandemic after completing his residency in New York City. Jameson also inherited something from his father, as the elder Taillon was a champion table tennis player in college.