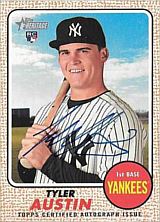 It looked like he would be up in the Bronx in no time, but it took longer than anticipated. His 2013 season was cut to 85 games because of injury, with most of his playing time coming with Trenton. He hit only .257 with the Thunder with 6 homers and 40 RBI. He repeated the level in 2014 and hit .275 in 105 games with 9 homers and 47 RBI. They were decent numbers, but not those of a budding superstar as those of his first few seasons had been. 2015 marked his third straight year starting at Trenton, but this time he was promoted to the Triple A International League after 21 games hitting .260. With the Scranton/Wilkes-Barre RailRiders, he hit only .235 for a combined batting line of .240/.315/.343 with 6 homers in 94 games, weak numbers for a player expected to be a power threat. His lack of progress could have led to his being released, but the Yankees gave him another chance in 2016. Back to Trenton he went. He hit .260 in 50 games, was promoted to Scranton/Wilkes-Barre and there things finally clicked. In his next 57 games, he hit a scorching .323 with 24 doubles and 13 homers to earn the long-awaited promotion to The Show.

In his major league debut for the Yankees on August 13, 2016, he played first base and batted 6th against the Tampa Bay Rays, one day after former superstar Alex Rodriguez played his final game. In his first career at-bat, in the 2nd inning against Matt Andriese, he homered to right field to open the scoring. Fellow rookie Aaron Judge, also making his debut, followed him by also going deep in his first at-bat, something unprecedented in big league history. Tyler went 2 for 4 in his debut, and the Yankees were 8-4 winners. On September 8th, he hit a walk-off home run off Erasmo Ramirez of the Tampa Bay Rays with two outs in the bottom of the 9th to give New York a 5-4 win. It was the fifth straight victory by the Yankees, who had been playing very well since starting their youth movement and were now in the thick of the chase for a wild card slot. In 31 games, he hit .241 with 5 homers and 12 RBI.

Heading into 2017, with Mark Teixeira having retired, he was expected to compete for the Yankees' first base job with Greg Bird, coming back from a one-year layoff due to injury. Things hit a snag when spring training started as he was diagnosed with a small fracture in his left foot, putting him on the shelf for six weeks. He was called up for four games in June, going 2 for 13 with a homer, before returning to the minors. His injuries prevented him from seizing an opportunity to establish himself in the majors, given that Bird was injured as well and potential replacements, such as Chris Carter and Ji-Man Choi, failed to take control. The Yankees went out and acquired a very similar player in Garrett Cooper, another minor league veteran with power, and he had some success in early August, but he was injured as well. Austin came back on August 17th and did not waste his chance, going 2 for 4 in his first game, and then, on August 19th, connecting for a three-run homer against Chris Sale of the Boston Red Sox in his first at-bat of the game before slugging a ball to the deepest part of Fenway Park his next time up, only to see center fielder Jackie Bradley Jr. deprive him of extra bases with a leaping catch against the wall. He added a double in the 9th as the Yankees won the game, 4-3. He ended up hitting .225 in 20 games with 2 homers and 8 RBI. Bird was finally healthy down the stretch and took over first base for the final few weeks of the season and the postseason.

Austin was considered an outsider to make the Opening Day roster in 2018, but another injury to Bird resulted in his starting at first on Opening Day. Facing Toronto Blue Jays left-hander J.A. Happ on March 29th, he did not collect a hit. He had to wait for his next start, on March 31st, to do so, when he homered twice in a 5-3 loss to the Jays. On April 11th, he was at the center of two incidents in a 10-7 win over the Boston Red Sox. In the 3rd inning, he slid hard into shortstop Brock Holt in an attempt to break up a double play, leading to the two benches emptying. Then, in the 7th, he was drilled in the back by a 97 mph fastball from Joe Kelly. He had no doubt this was in retaliation for the earlier play and charged the mound, resulting in both benches emptying again. Both he and Kelly were ejected, as were Tyler's third base coach, Phil Nevin, and reliever Tommy Kahnle. Austin was suspended for five games and Kelly for six, although his suspension was reduced to four games on appeal. He hit .223 with 8 homers and 23 RBI in 34 games but was sent back to the minors in mid-June. On July 30th, he was traded to the Minnesota Twins, along with pitching prospect Luis Rijo, in return for starting pitcher Lance Lynn. The Yankees had acquired another first baseman, Luke Voit, in another trade the day before, making Austin redundant. He was called up to Minnesota on August 11th, when Logan Morrison went on the disabled list with a season-ending hip injury and in his first game homered off Francisco Liriano in a 4-3 win over the Detroit Tigers. He hit .236 in 35 games for the Twins with 9 homers and 24 RBI.

Austin started the 2019 season with the Twins but went just 1 for 4 in two games before being designated for assignment on April 6th. Two days later, he was traded to the San Francisco Giants for minor leaguer Malique Ziegler. He scuffled in San Francisco, batting .185/.279/.400 in 70 games (147 plate appearances) before being designated for assignment and released in August. The Milwaukee Brewers signed him to a minor league deal on August 16 and, after a 15 game tear with the San Antonio Missions (.333, 4 home runs, 10 RBI), he was a September call-up, chipping in a .200/.370/.450 line in 17 games (27 plate appearances). On the season's conclusion, he was outrighted off the 40 man roster and declared free agency. In November, he signed a deal with the Yokohama DeNA BayStars of Nippon Professional Baseball.