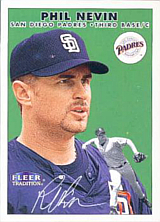 Phil Nevin, who played 12 seasons in the big leagues, competed for the United States at the 1992 Barcelona Olympics. He was selected by the Houston Astros with the first overall pick in the 1992 amateur draft, against the wishes of Astros scout and Hall of Famer Hal Newhouser, who felt the pick would be better served on a high school infielder in Michigan named Derek Jeter. He made the All-Star team in 2001, a year in which he hit 41 home runs for the San Diego Padres.

Nevin was at California State University, Fullerton at the same time as Frank Charles, Steve Sisco, and Dan Naulty. He was also punter and placekicker on the school's football team.

On May 31, 2006, he was traded to the Chicago Cubs for Jerry Hairston Jr.. He played for three teams that year, hit 22 homers, but it was his last year in the majors.

Nevin managed the Orange County Flyers in 2009, then moved to the Detroit Tigers organization. He was the skipper of the Erie SeaWolves in 2010 and of the Toledo Mud Hens from 2011 to 2013. In 2014, he moved to the Arizona Diamondbacks organization as manager of the Reno Aces. He was one of the candidates in the running for the position of manager of the parent Diamondbacks after the 2016 season, but lost out to Torey Lovullo. A few days later, he accepted a position as third base coach of the San Francisco Giants in 2017, but was let go after the season. In 2018, he joined the New York Yankees as third base coach and stayed until the end of the 2021 season.

In 2022, he was named third base coach with the Los Angeles Angels. On June 7th that year, with the Angels in a 12-game losing streak, he was named interim manager in place of the fired Joe Maddon. The Angels lost their first game under his leadership that same day to match the franchise record of 13 straight losses. On [June 27]]th, he was handed a ten-game suspension for his role in a bench-clearing brawl in a game against the Seattle Mariners the previous day. There had been incidents of batters being brushed back in the previous games of the series, and the umpires had warned both benches before the game that no further retaliation would be tolerated. In spite of this, Angels starter Andrew Wantz threw a pitch at OF Julio Rodríguez in the 1st inning, and when his first pitch in the 2nd hit Jesse Winker, all hell broke loose, with a major and violent brawl in front of the Angels' dugout. Nevin was one eight persons ejected after order was restored, along with Mariners manager Scott Servais, but his suspension was the longest one because MLB considered that he had ordered his pitcher to throw at opposing batters in spite of warnings being in place. The suspension was not subject to appeal.

He was eligible for election to the Hall of Fame in 2012, but did not receive a single vote. His son Tyler Nevin reached the majors in 2021; another son, Kyle Nevin, was signed by the Los Angeles Dodgers after being selected in the 2022 amateur draft.